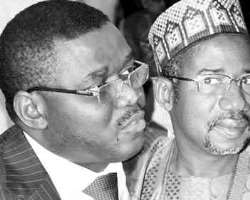 When Priye, a student of the University of Abuja got pregnant in 2008, it was to an orphanage in the Federal Capital Territory she headed to hide her misdemeanour from her parents. On learning that her new born baby tested positive to the Human Immuno deficiency Virus, she abandoned the baby in front of an orphanage, thus swelling the number of infants with the deadly virus in motherless babies' homes in the Federal Capital Territory.

No fewer than eight children living with HIV/AIDS are being catered for in various homes in Abuja.

Also, 10 babies have died between 2007 and 2009 due to complications from Acquired Immune Deficiency Syndrome in orphanages in the FCT.

Ironically, orphanages do not get any subvention from the Social Development Secretariat of the FCT Administration, according investigations, despite the fact that they are duly registered and entitled to monthly or quarterly subventions to meet their financial needs.

The proprietor of City of Refuge, Mrs. Biobele Odesola, who caters for three infants diagnosed with the HIV explained that it has been tough caring for them. The affected children, aged four years, nine and two months respectively, were brought into the home by their mothers who could not cope with the task of caring for them.

She explained that the home had lost six HIV positive children in the past on account of inexperience on how to manage the disease, but noted that she has now acquired the needed experience to care for the sick children. She gets anti-retroviral drugs and medical advice from a member of the board of trustees of the orphanage who is a medical doctor.

She said, 'We spend a lot of money on medical treatment for the children.' We nearly lost Lucky, 11 years old, last Friday when he became seriously sick and had to rush him to the National Hospital where he is receiving treatment now,' Odesola stated, adding that she received subventions from the Social Development Secretariat and depends on her savings and public support to run the home. She revealed that about 40 children have been adopted.

Yeye Bolanle Dare, proprietor of Mother Theresa, said her home harbours two babies, Tony and Seun, who suffer from cerebral spinal meningitis and Adunola with congenital heart defect. Another girl, Onyinye, suffers from umbilical hernia and a cleft palate. The eight -months old baby girl who was picked from a dustbin outside the orphanage cannot eat solid food and had a protruding belly button. Though she was lying quietly in her cot when our correspondent visited, the moment she heard the sound of music from the stereo, she rolled her head from side to side in enjoyment of the rhythm.

The three babies, according to Dare, required about N20m for surgeries in India, but their hope of survival depends on the philanthropy of public-spirited individuals. The proprietor explained that she had received about N3m subvention in six instalments from the FCTA since the orphanage was established three years ago. The home has lost five babies to diseases and given out 10 healthy children for adoption.

The Christ Treasured Royal Orphanage with twelve children depends largely on the benevolence of some Christian organisations and ministries. Rev. Erhuotor Abraham who runs the home said a child has mobility problem on account of the rough-handling from his demented mother. The cleric who once served with the Assemblies of God Church, said he was motivated to operate a home for abandoned children because he was a victim of abandonment himself.

'My mother abandoned me in the bush because I had acute hydrocephalus (water in the head) as an infant. A neighbour found me and brought me back to her, but she rejected me at my granny's instigation. The woman took me home with her and brought me up. So, the way to show gratitude to God was to help children in similar circumstances,' he said.

The home has a block of classrooms where the children are being taught. Children from the surrounding area are encouraged to attend the school. Out of the 83 pupils in the school, 20 pupils pay N1,500 as tuition fee per term. The home, according to Abraham, has not received a kobo from the government as subvention since it was formed in 2004.

The story was the same at the SOS Children Village which has 94 abandoned children – 52 males, 42 females under its care. Its Director, Mr. Sule Oke, said that the centre commissioned by the former first lady, Hajia Turai Yar'Adua, has not received anything from the government. The SOS Village operates a unique family care system in which about six children are placed under the watchful eyes of adults serving as foster parents living in the expansive compound. Children are not given out for adoption; they are rather educated, groomed into adulthood and then settled into the larger society.

The home was the third in the country and was solely funded by SOS International. Oke said that he has no record of any serious maladies or afflictions in the village, adding that all the villagers were healthy.

At the Holy Sisters of the Needy, the situation was different. Funded by the Catholic Church, the home has 19 boys and 37 girls out of which two girls and a boy have full blown AIDS. The sister in- charge of the home, Rev. Sister Chidalu Mbajiorgu explained that she has never received any financial support from the government, and that the children are not given out for adoption.

She disclosed that the afflicted children are healthy because their food is high in protein. 'When we take them to UNIABUJA Teaching Hospital, other AIDS patients would be wondering how we take care of them because they look so healthy. One was picked up in Abuja here while the other two were orphans brought to us from the South-East; their parents must have died from AIDS,' she explained. The orphanage, established in 1995 had lost about five children.

Mallam Sulaiman Umar who oversees the Abuja Children's Home, Karu, wished he could have enough money to meet the various needs of the vulnerable children under his care. The residents of the home include an eight year old boy suffering from epilepsy and Ramatou, who bumps and is afflicted with abnormal body growth. Her legs were of unequal length.

Umar complained that the N.7m he receives as subvention from the FCT was grossly inadequate to pay staff salaries, feed the 49 inmates, and settle utility bills and other miscellaneous items. He stated that the home's main revenue earner, a nursery and primary school in the premises had been taken over by the government. He supplements the paltry subvention with the irregular proceeds from users of the multi-purpose hall belonging to the home.

Umar said, 'The money from the government is not enough. I go home and can't sleep at times because of needs that have to be met. I want the government to increase the subvention and we need the support of corporate bodies and individuals.' The home, he said, has lost two children to AIDS and given out about 85 children for adoption.

In her response, the Director of gender department, Social Development Secretariat of the FCT Administration, Mrs. Hannatu Attah, explained that her office could only give subvention to five orphanages out of the 14 registered homes, adding that there was no resources to give to every home, which she noted 'were established by their proprietors out of love for abandoned children and orphans and not to collect pay-out from the government.'

She denied that her department owed the orphanages backlog of subventions, insisting that they were paid as and when government released funds to her office. She attributed delays in paying the subvention to the need for due process.

Attah however, admitted that the government had no special arrangement to cater for children living with HIV/AIDS, stressing that the homes have the responsibility to take care of the medical needs of the afflicted children.

'When a home undertakes to take care of abandoned or orphaned children, you don't select but accept all of them and do your best for them,' she said, adding that she has reservations about some orphanages which she said may be engaging in child trafficking as they were allegedly not transparent in their activities.