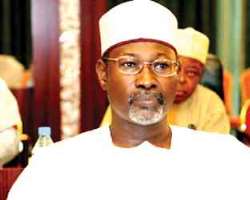 Attahiru Jega
Mixed reactions on Wednesday trailed the decision of the Independent National Electoral Commission to hold the January 2011 governorship poll in four of the states, where rerun elections were held.

The commission, in an advertorial on Wednesday, said that the governorship election would not hold in the four states — Rivers; Edo; Ondo and Anambra — in January 2011.

The advertorial in some national dailies was titled, 'Independent National Electoral Commission Conduct of Governorship Elections.'

By the publication, the tenure of the state governors will end on May 29 contrary to their expectations.

Reacting to the publication, the Bayelsa State Government said it would seek a proper judicial interpretation on the INEC advertorial that put 2011 as the year that Sylva's tenure would end.

The state Commissioner for Information, Mr. Nathan Egba, said that the government's position was based on the certificate of return issued to the governor by INEC after his victory at the re-run election in 2008.

Also, Ekiti State Governor, Mr. Segun Oni, said that the 2010 Electoral Act, which the commission based its decision on, could not take a retroactive effect.

Oni, in a statement by his Chief Press Secretary, Mr. Wale Ojo-Lanre, said, 'Even as we are not afraid of standing for elections anytime provided the constitution is followed, it must be stated that laws are not known to take retroactive effect.'

The statement added, 'Though the issue of tenure of office of the states where by-elections were held is still a subject of various law suits, we must state without fear of contradiction that tenure of Governor Oni and other governors whose elections were nullified and returned to office after winning by or rerun elections is not for INEC to fix. It is simply a constitutional matter.'

It said that there was a pending case on the matter at the Court of Appeal and that INEC had been informed accordingly.

But the National Publicity Secretary of the Action Congress of Nigeria, Alhaji Lai Mohammed, said that the decision of INEC on the matter was in accordance with the law, equity and justice.

He said, 'The decision of INEC on this matter is in accordance with law, equity and justice. A person cannot benefit from an election that was fraudulent and massively rigged. The fact that the same governors won the same reruns is no evidence of their popularity because invariably they also used state resources and might to manipulate the rerun.

'Therefore, if the situation being canvassed by them, that they should start a new tenure when they were sworn in for the rerun (is allowed), then they will be benefiting from their own fraud and this will now be profitable and attractive to rig election, have it annulled, use state resources for the rerun and spend about three extra years as governor.

'The amended constitution states that the tenure of a governor shall be four years, rerun or no rerun. The decision of INEC on this matter accords with the law, equity and common sense.'

Also, the Save Nigeria Group said that INEC had done the right thing by placing the advertorial.

The SNG Spokesperson , Mr. Yinka Odumakin, said it would have been 'electoral robbery' for the governorship election not to hold in Ekiti state in January.

'The cases of Ondo, Edo, Anambra and Rivers are different. The governors came in to start a fresh mandate after their court victory,' he told one of our correspondents.

'Oni and others were in office, but only went for supplementary election. If they had lost, their opponents would have started fresh mandates too. It is quite amoral to ask for extension of tenure for Oni and others. INEC should be commended for doing the right thing,' Odumakin added.