MRS JONATHAN: REAL LESSONS ON THE POWER OF THE CHIEF EXECUTIVE OF A STATE 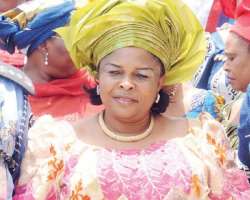 Her Excellency, like every well-meaning daughter or son recently went on a two-day official visit to her hometown in the Rivers State of Nigeria.

Madam, there must be pride in among the Okrika people to see your presence in their midst. Also, there is more international pride to your home background as evidenced as having come from the Okrika Island of the Rivers State, especially from an area called Obama, a great and passionate name at best.

First Lady Jonathan, as history tells us for over 400 years the people of Okrika have gone through various struggles, starting as a midpoint of Euro-American slave trade and in the early part of the 20th century the land and the people of Okrika were overshadowed by the city of Port Harcourt.

As an Ijaw woman who has watched the long standing exploitation of the area of Niger River Delta of Nigeria by the Euro-American Oil Corporations, one understands your current sentimentalities.

Madam, here is the problem. You appeared to have crossed the line when you openly went into tantrums with Governor Chibuike Rotimi Amaechi, the Chief Executive of the Rivers State. While this writer has never met you or Mr. Amaechi and has no relationship to any of you, there is something that is worth noting in this write-up.

Mrs. Jonathan, there is a bit you need to know about an executive system of government which not only includes the Presidency but the gubernatorial rule or the power of Governorship especially.

As you may be aware of the Nigerian Constitution is modeled after the American constitutional and executive system of governance.

Madam, as one who currently occupies the office of the First Lady of Nigeria you are the number one Hostess to the presidency. Therefore, by tradition your role is ceremonial, social and in our contemporary times you may engage in causes that are dear to you, and this you have done very well with your promotion of women’s issues.

Madam Jonathan, at the time of this writing you do not have any electable power, governmental role and executive function in the Nigerian government. But privately you could serve as an adviser to the President or any Governor and again this should only, only happen privately. Period!

As we now know from media reports, while recently in your hometown of Okrika to launch one of your initiatives for women, during the last day of your two-day visit, and right in front of the people of the Rivers State, you displayed incivility to the Chief Executive of the Rivers State.

As we rightly know, the issue of land is important to the Okrika people and reasonably sentimental to you, therefore any worry you have on this issue should have been communicated to the Chief Executive of the River state, privately.

Thereafter, any public comment on the matter by the Governor as it was during your side by side presence with the Governor should have received silence from you, non-verbally and verbally.

Madam, among your reported utterances and behaviors, here is the one that constitutionally, was almost destabilizing to the functioning of the government of the Rivers State. That is, the verbiage in which you reportedly raised your voice and told the Chief Executive of you State, "Listen! You must listen to me." Madam, Nigeria is not yet a banana republic where utterances like these are all too common.

Madam, you need to know that the position that Chibuike Rotimi Amaechi of Ikwerre occupies is so powerful and authoritative that it could have been worst for you in terms of the overall frustration over this whole matter.

It is reported that the Governor after your unruly acts towards him and during a reception for you stayed in his car. He could have been thinking of putting you on official notice or taking other Stately measures towards you? We will never know.

But what is clear is that you were apparently recalled back to your official home in Abuja, a far lesser dishonor compared to any other executive consequence from the Chief Executive of the State.

Madam, in an executive democracy like Nigeria the power of a Governor is huge. He as in the case of the Honorable Amaechi is the sovereign head of the Rivers State. That means, within the Federal system of Nigeria, the Governor retains independent power and he is not subordinate to anyone including the President, in this case your husband, Dr. Goodluck Jonathan.

The Governor like the President is equally subservient to the rule of law or the Constitution. Madam, in a truly and functional nation with an executive system of government, the Governor by virtue of being elected by the people of the State has the statutory power to implement any executive order he wishes and, not even the State legislature could stop him.

Madam, when you reportedly told the Governor in his face that he should not use the word "Must" in reference to the demolition of buildings in place for space for new schools, you committed a grave error.

Why, because no one, not the even President, the King, or the legislature could stop him from his "must" to do list except the Courts.

Madam, now you see why your air evacuation was so sudden without completing your planned visit to the prisons and to a newly built school.

Madam, such is the nature of the extensive power of an executive, independent and sovereign head of a State. You may not recognize the constitutional and political influence wielded by a Governor but your husband certainly does in his capacity as a President in an executive system of government.

Madam, you almost pushed the State "to go into crises" the very concern you publicly posed to the Governor. Thank God for airplanes, as you left so quick in that some oppositional or troubled minds could have taking advantage of this confusion and provoke more problems.

Madam, any reasonable person knows you met well to your people given the long history of the exploitation of that area of Nigeria. So your concerns must be welcomed by any Nigerian leader but madam, learn to present your issues privately as such is the duty of the first lady of the nation and the role of the first hostess to the Presidency.

Madam, to do otherwise especially when your husband could be in power for the next eight years could further compound the functioning of a society that is almost at its breaking point.

What every good faith Nigerian should see next is the breaking of kola nut or the sharing of soft drink between the First lady and the Governor in the Okrika town or at the Governor’s compound, all for the sake of harmony. There is no need for police or official investigation, all that is needed now is just a kola nut or a fizzy drink summit for peace sake and for the future progress of the people.