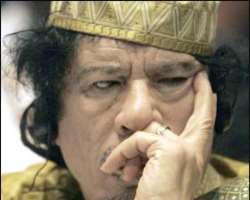 Gaddafi, the Libyan leader and the erstwhile chairman of the African Union (AU) landed in Italy on Sunday, and made brute racist remarks, which explicitly betrayed his gross disdain for black African people, and called to question the true intention behind his zeal for African unity.

Addressing the European Union (EU) in Rome, Gaddafi warned that “Europe runs the risk of turning "black" unless the EU pays Libya at least €5 billion (£4.1 billion) a year to block the arrival of illegal immigrants from Africa”. He continued, “Tomorrow Europe might no longer be European and even black as there are millions (of Africans) who want to come in. He described the migration pattern as something “very dangerous”.

If one analysis Gaddafi's statements critically, it comes out clear that he is essentially saying, “Europe, you need to protect your prestigious white identity and prevent it from being blackened by the influx of black African people”.

He is actually playing the race card quite subtly, by appealing to the racial prejudice of the European people. Thus, he not only referred to the potential risks posed by illegal immigrants as undesirable consequences, but also that, black faces in Europe, whether legal or otherwise in itself, constitutes a danger to white European identity.

Gaddafi bolstered his dislike for black people and then projected his own racial bias on white European Christians when he further remarked, “We don't know what will happen, what will be the reaction of the white and Christian Europeans faced with this influx of starving and ignorant Africans”.

After casting slur on the “blackness” of sub-Saharan African people, he unabashedly called on Europe to open its borders to Libyan citizens, “There is also desirable immigration. There are Libyans who have money and I encourage them to come to Italy to invest.”

After his speech, one Italian MP, Luigi de Magistris, criticized the Libyan leader of keeping tens of thousands of African migrants in "concentration camps" in the desert, reported Telegraph, UK.

Gaddafi's blunt disrespect for black people in general, calls to question the intention behind his call for African unity. Many scholars believe Gaddafi has a hidden agenda against black Africans and that the African Union (AU) was simply a means for him to further his religious and political ambitions in sub-Saharan Africa. One such scholars, Prof. Kwesi Kwa Prah, alleged in 2004 that, Gaddafi's true objective in AU is to create a space for Arabism and Arab expansionism.

Gaddafi betrayed this sentiment at an Arab League in 2001, when he declared to the Arab Diasporas, “The third of the Arab community living outside Africa should move in with the two-thirds on the continent (Africa), and join the African Union which is the only space we have”. Readers are invited to take critical note of the expression “…the only space we have”. What was he implying exactly?

Broadcasting live on Rwanda Radio on 17 May 1985, Gaddafi said to Rwandans “You must teach that Islam is the religion of Africa…We must wage a holy war so that Islam may spread in Africa.” –quoted in [Bankie and Mchombu, 2006:239-240].

It came as no surprise that, in a second speech he delivered to paid Italian women on his recent visit to Rome, he declared to them, “Islam should become the religion of Europe”, and then handed them free copies of the Koran.

If Gaddafi is going as far as telling Europeans to adopt Islam and in effect become Islamic states governed by the Shariah, what stops him from pursuing his Arab expansionist mission in sub-Saharan Africa and its “ignorant” and “starving” masses, using his oil cash as a lure to trap some self-seeking African leaders into his deceptive trap?

Gaddafi must be told in the face that, black Africa has had enough from Arab and European expansionisms, which resulted in colonialism, slavery and the lost of the African identity and personality. That, black Africa is not simply a cultural vacuum to be filled by the religious doctrines of any over-zealous groups of people seeking wealth, dominance, and influence. That, black Africa fought and freed itself from shackles of colonialism long time ago and finally that, Africans need not define their identity by any imported heritage, including Islam.

By his impulsive utterances and actions, Gaddafi has shown quite clearly that he has no respect for black people and he sees sub-Saharan Africa as lost people only to be converted to Islam. I call on the African Union (AU), the European Union (EU), the Italian government, the United Nations (UN), the Arab world and Sub-Saharan African people to condemn in no uncertain terms the racial and thoughtless remarks of the Libyan leader.

Kwame E. Bidi is a 2009 graduate of University of Ghana, currently based in the United States where he is pursuing internship at Heathcote Center Inc, and preparing for advance studies next year. Kwame believes in Pan-African ideals as postulated by Kwame Nkrumah, Sekou Toure and Patrice Lumumba. He has written several feature articles on Africa in Mayihlome news, South Africa and Cedipost, Ghana.