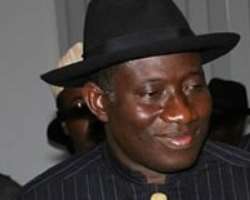 Jonathan had said on Monday that he was planning to meet with Buhari 'soon' as part of his consultations with political leaders over the need to have credible, violence-free elections next year.

Though a presidential aide said yesterday's meeting was held specifically for the breaking of the fast, he did not rule out the possibility that some discussions over 2011 were held.

He said the president has earlier had similar Ramadan breakfast with former president Shehu Shagari and other leaders.

A source close to Buhari also said the two leaders might have discussed issues regarding the next general elections. 'It was a routine Ramadan breakfast meeting, but I can tell you that some political issues might have been discussed,' the source told Daily Trust last night.

But another aide of General Buhari, who accompanied him to the Presidential Villa, said the two leaders and other officials at the meeting merely exchanged pleasantries and no more.

Buhari is running for president for the third time, this time on the platform of newly-formed Congress for Progressive Change. His main support base is in the North, where agitation for power shift has been strident.

For his part, Jonathan is expected to seek the candidacy of the ruling People's Democratic Party, though he is yet to publicly declare for the race.

On Monday, the president said through a statement by his spokesman Ima Niboro that he has earlier 'met Gen. Muhammadu Buhari, and will meet him again soon,' as part of meetings he was holding 'to ensure that the next presidential elections do not degenerate into a do-or-die affair as our elections are sometimes wont to do.'

Monday's statement was issued to clarify an earlier meeting with former president Ibrahim Babangida, which media reports said was held to persuade the former military ruler to drop out of the presidential race.

The statement had said, 'The fact is that President Jonathan has been meeting different leaders on different occasions and platforms. Some have come to inform him of their intention to run for the presidency. Others he has met with as a matter of courtesy being a sitting president, and keen to ensure that the next presidential elections do not degenerate into a do-or-die affair as our elections are sometimes wont to do.

'He has met former Vice President Atiku Abubakar; he has met Babangida; he has met Gen. Muhammadu Buhari, and will meet him again soon. He has met with Gen. Yakubu Gowon, two time president, Chief Olusegun Obasanjo; former president, Alhaji Shehu Shagari; former Vice President, Alex Ekwueme, and former head of state, Gen. Abdulsalami Abubakar. He will meet with even more leaders and political actors as the race to 2011 heats up.

'It is extremely uncharitable for anyone to spin these meetings in such negative lights, and attempt to force the president into retreat from these well thought out engagements with political leaders of all hue and disposition in the interest of the country.'