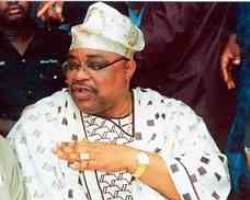 The war of attrition in the Oyo State Peoples Democratic Party (PDP) is taking its toll on the party and the National Working Committee NWC seems to have been overwhelmed by the unsavoury development. The battle for the control of the chapter in the pacesetters` State would also reverberate at another level, because the leading tendencies involved in the battle to control the soul of  party in the state are equally involved: it is the struggle for the anointed candidate for the Oyo Central senatorial district for 2011 election.  Major contenders for the ticket, are Senator Teslim Folarin, Jumoke Akinjide-Balogun,  Brigadier Raji Rasaki[ rtd] and Chief Bisi Ilaka

Teslim Folarin: is the incumbent. His ambition has since run into troubled waters, because of his perceived romance with the `opposition` flank within the party who are against Alao-Akala`s second term ambition.

Folarin who hails from Ibadan, is in league with other politicians from the cosmopolitan city, who are against a fresh term for the besieged Governor, Alao-Akala. In this group are former governor,  Senator Rasheed Ladoja, former National Vice-Chairman, PDP  South-West, Yekeen Adeojo, former Minister for Special Duties, Elder Wole Oyelese and  Senator Lekan Balogun, who are the central figures in Patriotic Elder's Forum.

There was speculation that the Senate Majority Leader was nursing a gubernatorial ambition, but that has been discovered to be untrue. Trouble-shooting efforts  of a prominent Ibadan business man and religious leader, Azeez Arisekola-Alao to reconcile Folarin and the governor had not  been successful as the two gladiators have refused to yield grounds.

Akala has vowed to ensure that Folarin did not get a fresh ticket on the platform of PDP to the Senate.

In the face of open declaration of war by the beleaguered governor, the Senate Majority Leader has refrained from speaking on the cold war between him and Alao-Akala, even as he keeps his war arsenal for the emerging battle close to his chest. But it is believed that  he intends to use his good offices to ensure that the National Chairman of the PDP, Dr Okwesilizie Nwodo to take more than a passing interest in the  PDP primary in Oyo State.

Folarin is also banking on his network in the Presidency and it is not unlikely that the Senate President, David Mark, would be willing to ensure that Folarin gets a good deal.

But besides his trouble with (SAN) Akala, people are not comfortable with his performance in the Senate. In the thinking of the average Ibadan electorate, Folarin has not explored his position and political clout as Senate Majority Leader to galvanise federal presence in the state.

“It was the same exalted seat that Dr Olusola Saraki occupied in the Second Republic and he was able to secure federal projects for the old Kwara State,“ an agitated PDP  chieftain told Daily Sun.

Jumoke Akinjide- Balogun: former Presidential Adviser on the Federal Capital Territory [FCT] , to former President,  Olusegun Obasanjo, daughter of former Education Minister in the First Republic and Justice Minister in the Second Republic,  Chief Richard Osuolale Akinjide is in the race for the ticket. Jumoke had been telling those who care to listen that  “Oyo Central deserves quality representation“—- his veiled but damning verdict on the performance of the incumbent.

To PDP stalwarts, who dismiss her as a green horn in Oyo politics, her response had been a vohage into her activities in the party right from when  she was in the Villa as Special Adviser on FCT.

The Amazon banks on her successful legal career and political experience.

She has refrained from being taken to task that what she is bringing to the race was his father`s pedigree in Oyo PDP.

“ In a young democracy, in a developing country like ours, we need all the best talent, not our worst, which we seem to have. Most of the politicians are not the best. I think our duty is to participate in politics, to educate,“

But even as she insists that her ambition had nothing to do with the former Justice Minister, it is not lost on PDP stalwarts in Oyo that the former minister, a leading figure in the Patriotic Elders Forum  sudden volte face on the PDP crisis in the state was informed by expediency: to secure  senatorial  ticket for his daughter.

Chief Akinjide has since abandoned the struggle to retrieve the party structure from Alo-Akala and had been keeping the `rebel` in Oyo PDP at arms length, politically .The former minister has since fallen in line and sees the embattled governor as the leader of the party in the state.

But prominent Ibadan elite who are peeved over the governor's attitude to the revered  traditional, the Olubadan of  Ibadanland , Oba  Samuel Odungade  are spoiling for a fight with Akinjide and have vowed to undermine the ambition of the cerebral and urbane Jumoke.  They have pointed fingers of scorn in the direction of the former minister as one of those emboldening the Governor show disrespect to the Olubadan. Akinjide`s daughter holds the chieftaincy title, Iya Yeye of Ona Ara land, courtesy of the Olubadan stool.

Raji Rasaki:  former Lagos State governor is also an aspirant for the senatorial ticket on the platform of PDP . His billboards adorn locations in the state capital.

The former governor was a gubernatorial aspirant for the party ticket in 2007 and abandoned his dream to govern the state, before the party primary that produced the incumbent, who was then deputy governor to Ladoja. In the wily Oyo politics, Rasaki  has nothing to bring to the negotiating table, unlike the other aspirants: incumbent Folarin and Jumoke Akinjide, whose father is leading the vanguard of pro- Akala  supporters to the disaffection of the  Ibadan elite.

But while he is not the candidate of the governor, he is however not in the bad book of Akala as he has refrained from joining the fray of anti- Akala camp in Ibadan.

Chief Bisi Ilaka  is a Lagos-based businessman. Ilaka vied for the PDP primary in 2007 and lost to the incumbent, Folarin. Of all the contenders for the race, he is the only one that is not an indigene of Ibadan. Ilaka is from the ancient city of Oyo and the favoured candidate of the prominent traditional ruler, Lamidi Adeyemi, the Alaaafin of Oyo. He does not belong to the  Patriotic Elders Forum, but his relationship with Governor Akala is everything but cordial.

Party structure and senatorial slot
There has been a sustained fierce battle for the control of the party structure in the state by the leading gladiators and contenders for the party gubernatorial ticket. While Governor Alao-Akala is favourably disposed to the Chief Dejo Afolabi-led executive, the opposition group in the party who are in the Patriotic Elders Forum want  a new executive for the PDP chapter in Oyo.

A 19- member committee set up by the immediate past National Chairman of the party,  Prince Vincent Ogbulafor on the recommendation of the General Ike Nwachukwu-led reconciliation committee report had constituted an all inclusive implementation committee to serve as an interim executive of the party in Oyo state .

While the Nwachukwu committee had given five slota in the new arrangement to the former governor, Senator Ladoja, it also gave same number of slots to Governor Akala, leaving nine slots to be  shared between members of the opposition group, the  Patriotic Elders' Forum, which has  Elder Oyelese, former Aviation Minister, Alhaji Yekeen Adeojo and Senator Lekan Balogun as leading members.

The General Nwachukwu committee equally recommended that the Alhaji Dejo Afolabi led state executive of the party should be dissolved for the implementation committee to function.

Alhaji Yunus Akintunde, the chairman of the implementation committee  has not been allowed to function.  A case instituted to challenge the Nwachukwu report by the state government is before an High Court in the state.  The Oyo PDP crisis remains a riddle that the PDP National Working Committee, led by Dr Nwodo  has not been able to solve. The fate of the contenders for Oyo central senatorial district ticket hangs in the balance; it  would be decided by the two factions. Folarin  is with the Ladoja group, while Jumoke Akinjide is in the camp of Governor Alao-Akala. Rasaki  and Bisi Ilaka remain  fence sitters.