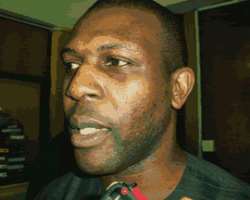 Former Action Congress of Nigeria (ACN) gubernatorial candidate in Rivers State, Tony Princewill, has advised President Goodluck Jonathan to officially declare his interest in the race. Princewill, who spoke with journalists after a meeting with PDP National Chairman, Dr Okwesilizie Nwodo at Wadata Plaza, Abuja the Party national secretariat, submitted that a presidential ambition should not be shrouded in secrecy, as Nigerians are tired of reluctant presidents.

Well, one of the real reasons why I want to come back to the Peoples Democratic Party (PDP), is because one of the gentlemen who guided me in my early years in AC, is now the PDP national chairman. I am talking about Dr Nwodo himself. He is a very good friend of mine and he is somebody who has taken special interest in my political growth.

Were you one of those granted waivers, if not, are you expecting one?

Yes, very comfortable. He is a good gentleman and doing well. I will score him six over ten. So far, so good. We have a lot of structures coming up, he is doing a very good job and I think we should encourage him to make sure that he scored more.

Why?
Well, it is because we aren't analogue politicians. We see ourselves as digital politicians. This is a new age, we don't just follow people, because of where they come from. In the words of Dr Martin Luther King, we are looking at people, not just because of the colour of their skin, but based on the content of their character.

But the South-South leaders have adopted him; don't you think you would be running against the tide, considering the zone where you come from.?

Well, anybody who thinks that a jamboree like that could actually make significant difference in the politics of the south-south is kidding himself. Actually what is true is that Goodluck is a very good person, he has been doing his best to pilot the affairs of Nigeria, but he hasn't said that he wants to run. He should come out, he doesn't need to be afraid, he needs to be very bold. If he does so, on the basis of what he said, people would make a judgment call on it.

And you think Atiku would address that?
Well, if you follow the meeting we had with him, two nights ago, he made a direct commitment to address that issue. He said that within the first week or month of his presidency, he would issue a white paper and start the process of implementation of the white paper. So, that's the kind of commitment I want to hear. I am interested in substance.

But what do you make of IBB presidential ambition?
Well, unlike those who are asking what he forgot at Aso Rock, I think what these guys are trying to do is to rewrite their history. Take IBB for instance, June 12, he is trying to rewrite his role in history. So, let's give him the opportunity to come out and contest. If the people and the Party want him, then he would know and that would be the end of the matter, but now, Nigerians are very cynical people and it doesn't matter who comes up they will look at the person negatively .

I don't think his membership records are being questioned. I think what is being questioned is whether he has been given or granted a waiver. But this party as you can see now under the leadership of Nwodo is trying to create a level playing field for everybody. If anyone is trying to prevent Atiku from presenting himself as an aspirant, why not allow all of them to try their popularity. That's the best thing and the best way of establishing who-is-who. So, I don't think PDP as a party would want to prevent Atiku from coming out to contest. People want to support him, he should be allowed to contest. Let the party members make their choice at the convention.

Why are you not interested now?
It is because too many of us are driven by personal ambitions. I don't even think I want to be involved now. History wouldn't be kind to people who are involved at this stage. I think Nigeria is still in a mess, our leadership in complete disarray.

We have failed our people. At least, I can be at the other side blaming the leadership. I think it isn't time for some of us. Let be where we are. The atmosphere isn't conducive. Yes, Nwodo is trying to instill discipline, but today PDP doesn't have any ideology and what exactly are we talking about? I have been talking to the chairman about this and it is good to see that it is one of his agenda as national chairman.. .politicians should be able to answer questions on manifesto, irrespective of party affiliation.