RUNNING FROM THE POLICE 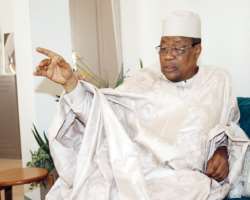 
One of the outcomes of inquests following cases of illegal police shootings – often in the back – is the belief of seemingly all policemen that only guilty people run from the police!

After the infamous clandestine recording of members of the Los Angeles Police department meeting out a horrendous beating to a scofflaw named Rodney King, America suddenly came to terms with the reality that frequently running from the police could also be in self defense.

I thus find much to question General Babangida’s (IBB) assertions regarding the guilt or innocence of the late General Mamman Vatsa based on a premise so transparent that the press-men who listened to this story and then printed it must have "been on the take".

For those not following the story or who may have forgotten, Mamman Vatsa was the erstwhile Minister of the "Capital territory". He was a brook no nonsense soldier who it was reported arrived at a venue where a commissioning of a building was in progress, picked up a chair and finding it of such flimsy manufacture, proceeded to break it and several others over his knee. Having satisfied himself that he was the witness of a monumental fraud he had those responsible for the construction arrested on the spot.

A man to be reckoned with, Gen. Vatsa soon found himself ensnared in a coup conspiracy against the IBB administration that was to cost him his life.

When asked about the demise of his dear friend and long time colleague, IBB assuaged his conscience by claiming that he – Vatsa – must have been guilty because when he was being held in detention he – Vatsa - attempted to escape by climbing into a ceiling ventilation duct; haba!

The prospects facing Vatsa can be summed up with an aside on the Russian KGB. It was revealed after the fall of the Soviet Union that people would be invited into the KGB office for an interview. Seated with a view of the city street and passersby, the interrogation would begin; after some time the subject would make some comment about being innocent of what they were suspected of doing at which time the KGB officer would laugh and advise them that they were certainly not suspects; pointing to the passersby, the officer would assert that they – those walking by – were the suspects! You, the officer would state "were guilty of something"!

Faced with the prospect of a Nigerian military court martial-kangaroo court, set up on the basis that no one accused – when have you heard of one – going free; you sef no go run [sic.]?

Let’s put the shoe on the other foot. In July 1966 another General – Ironsi – announced decree 34 that initiated the federal civil service that Nigeria enjoys today. A cadre of army officers were the "muscle" behind a Northern group that saw the "unification decree 34" as an anathema; first it would mean that the Northern region would have to share "revenues" with the other regions of Nigeria and then civil servants from other regions would now supersede them in the new Federal Service. Two of those army officers who were key members in the conspiracy that was to be known variously as "Ashura" or "Paiko’s Wedding" were IBB and Sani Abacha.

Today, all we hear from the living general on this subject is "Federalism"; if they are such converts to Federalism as to hold it as if they invented it, then they should be tried for the murder of General Ironsi; you can’t have it both ways; you were either very wrong then and you murdered the man, or you’re a hypocrite today. I guess we’re all waiting to see which one is it?