2011 Polls: INEC, EFCC Would Not Ban Any Politician - Jega, Waziri 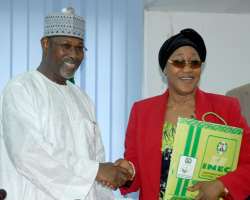 Both commissions also struck a deal that would enhance effective collaboration to a achieve fraud-free, transparent and credible elections in 2011.

However, the much expected announcement of the guideline and timetable for the polls was not to be thus dashing the expectations of political party leaders, who had waited for the all important dates, guidelines that would have kick-started the political campaign momentum. Nonetheless, the guidelines and dates are expected to follow the sequence already set in the newly signed electoral act.

The denial and announcement to work together was made when the Chairman of the EFCC, Farida Waziri paid a visit to the INEC Chairman, Professor Attahiru Jega in his office in Abuja.

Mrs. Waziri used the occasion of the visit to deny ever saying the commission was going to ban certain categories of politicians. This was even as Professor Jega affirmed that no politician will be banned on mere allegation of being corrupt when such allegations have not been proved by any court of competent jurisdiction.

That notwithstanding, she assured that EFCC would do everything within its power to partner with INEC in the onerous task of delivering credible elections because it is in interest of the nation, noting that all electoral malpractices would have to end.

The partnership between INEC and EFCC according to Mrs. Waziri, became imperative against the background of the fact that past elections have always had question marks even when countries like Ghana and other African countries have gotten it right by organizing free, fair and acceptable elections.

She explained that the uncommon applause the appointment of Professor Jega received was an indication that he is a distinguished Nigerian with integrity and therefore has a lot of work to do in order not to let Nigerians down.

"When Professor Jega was appointed, everybody accepted him; he then has to work hard to justify the acceptance. Series of elections held in this country have had question mark. This is in spite of the fact that a country like Ghana has done it and got it bright, why can’t we get it right. This is the time to get it right especially when Nigeria is 50," Mrs. Waziri said.

The INEC boss denied that her Commission was planning to ban some politicians on account of the corruption charges against them in court saying the law presumes a person innocent until proven guilty by the law court adding that EFCC would not take laws into its hand.

In extending hands of fellowship to INEC, Mrs. Waziri stated that her commission will operate within the confines of the law.

She warned the INEC boss to be wary of unscrupulous contractors who would be besieging his office because of the N87 billion naira that has just been release to the electoral Commission.

The EFCC according to her is carrying out due diligence on persons or firms coming to do business in Nigeria in order to sanitize the system as the EFCC has received series of petitions with frivolous claims.

In his remark, Professor Jega thanked the EFCC boss for her words of encouragement saying he was feeling inspired by the kind words.

He explained that the task ahead was a herculean one but the commission’s leadership is determined to make a difference and deliver credible elections.

The INEC boss stated that the success of the electoral commission would be predicated on its’ partnership and relationship with other stakeholders both home and foreign.

"We have to be careful whom we deal with, the task ahead is challenging but we are determined to succeed. This is the only way we can assure Nigerians that we are ready."

He then called on Nigerians to cooperate with INEC and get involved in the electoral process to bring about the desired change.

Answering newsmen later, Professor Jega said that the election timetable will be released soon and that is only what he could say.

He declined to make further comments when pressed for what was delaying the timetable as political parties were anxiously waiting its release.