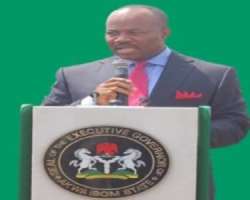 In an opening address at the awards ceremony, the Chairman of Ben Television International, and founder, Nigeria Arise Initiative, Dr. Alistair Soyode said the honour bestowed on Governor Akpabio, his wife and other Nigerians were based on their track record of achievements and contributions to the growth and development of Nigeria.

According to Soyede, "today we celebrate the achievements and contributions of compatriots to the task of nation building....today, we recognise Nigeria’s distinguished sons and daughters who have arisen and made marks in various fields of endeavour adding that the auspicious occasion of the award was unique as it comes at the heels of Nigeria’s golden Jubilee celebrations."

Dr. Soyode said Ben Television conducted an independent assessment in the country and found Governor Akpabio’s drive in building enduring infrastructure in the state of Akwa Ibom exceptional. He cited the massive road development projects, the underground drainage project, the prompt completion of Akwa Ibom International airport and indeed the free education programme of the administration as notable examples.

For Mrs. Akpabio, Dr. Soyede commended her for caring for the less privileged members of the society especially widows stating that history will not forget in a hurry, exceptional humanitarians such as Mrs. Akpabio.

The Ben Television boss who also commended other Nigerians who distinguished themselves in their chosen endeavours and were singled out for recognition said the Nigeria Arise awards was a way of motivating and encouraging leaders and mentors and cautioned that the selection process that brought forth recipients was based on merit.

In his remarks after being presented the award by Alhaji Bamanga Tukur, Governor Akpabio thanked the organisers of the event for considering him and his wife worthy for the honour done them assuring that the awards would spur them to do more for their people.

The Governor who dedicated the award to the Almighty God and the children of Akwa Ibom said the determination of his administration to make the difference ignited the drive at transforming the state from its hitherto rural and pedestrian status to an emerging destination in Nigeria. He listed some of the gains of his stewardship to include the free and compulsory education programme, the free healthcare policy for children, expectant mothers and the elderly. He said the infrastructural renaissance embarked upon by his government has seen to the construction of more than 205 federal and state roads, the completion of Ibom International airport and commencement of commercial flights. Others are the completion and switch on of power plant; the new government house, and massive intervention rural areas through the people oriented projects such as the village to village electrification programme that will ensure every community in the state is connected to the national grid.

Harping on the need for Nigerians to dedicate themselves to virtues and actions that will grow the country, Governor Akpabio urged citizens to arise and make good contributions towards the growth of the country assuring that his administration will spare nothing in its effort to transform Akwa Ibom into a model state in Nigeria.