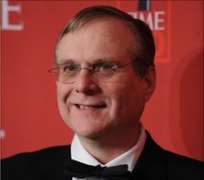 The co-founder of Microsoft, Paul Allen, is suing several high-tech giants for infringing patents held by a firm he founded in the 1990s.

The legal action against Apple, Yahoo, Facebook, Google and eBay, as well as six other firms, asserts that web technologies first developed by Interval Licensing have been infringed.

The patents are key to how e-commerce and search websites worked, it says.

Google, Facebook and eBay immediately said they would fight the accusations.

"This lawsuit against some of America's most innovative companies reflects an unfortunate trend of people trying to compete in the courtroom instead of the marketplace," a Google spokesman said in a statement.

"Innovation - not litigation - is the way to bring to market the kinds of products and services that benefit millions of people around the world."

A Facebook spokesman called the action "completely without merit".

'Key technology'
In the suit filed in the US District Court in Washington on Friday, Interval said it was seeking damages and a halt to the alleged violations of its patents.

The four patents concerned essentially involve using web browsers to find information; letting users know when items of interest appear; and enabling adverts, stock quotes, news update or video images to pop up on a computer screen while the user is engaged in another activity.

The company also alleges that it helped fund outside projects including research by Larry Page and Sergey Brin that resulted in Google.

The other companies named in the lawsuit are AOL, YouTube, Netflix, Office Depot, OfficeMax and Staples.

Interval does not name a precise figure for damages, but a spokesman told the BBC that it would be "determined as this progresses".

"We will do whatever is necessary. This is an important step. It is the first time that Paul Allen has filed a suit like this," David Postman said.

"Some of the technology developed by people working for Paul Allen a decade ago is now key to this search and e-commerce space. It is part of our daily life on the web and has shown itself to be of value to the industry today."

Patent activity
There has been a recent flurry of patent lawsuits involving Silicon Valley companies.

Apple, Nokia and HTC are involved in a long-running dispute over patent infringements involving smartphones.

Oracle has fired off its own legal action against Google, alleging that the search giant's Android mobile phone operating system infringed patents Oracle now holds for the open-source Java programming language, acquired through its purchase of Sun Microsystems.

There has also been an increase in people buying up companies to leverage the patent portfolio. But Mr Postman said that is not the case with Mr Allen's action.

"We are not asserting patents that other companies have filed, nor are we buying patent originally assigned to someone else. These are patents developed by and for Interval," he explained.

Mr Allen co-founded Microsoft with Bill Gates in 1975, and later started Interval in 1992. At its height, the company employed over 110 scientists, physicists and engineers.

The Wall Street Journal said among those who worked there were Robert Shaw, a co-creator of chaos theory; Max Mathews, who wrote the first widely used computer programme for music; and David Reed, one of the founders of the TCP/IP internet protocol.

Mr Allen, who made billions of dollars from his Microsoft shares, recently pledged most of his $31.5bn fortune to charity.

Last year, he revealed he had been diagnosed with non-Hodgkin's lymphoma.