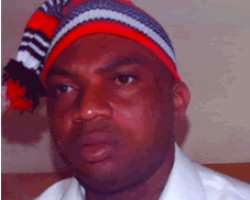 Nwaneri
President Goodluck Jonathan's perceived Presidential aspiration in the 2011 polls has recorded a major boost. A vociferous group within the fold of Peoples Democratic Party(PDP) known as PDP Vanguard has resolved to throw its weight behind the president if he decides to contest.

The group equally warned proponents of the party's zoning policy in order to stop President Goodluck from vying for the office to desist forthwith. Mazi Chinasa Nwaneri spoke on behalf of the group after a retreat at the Nicon Luxury Hotel, Abuja.

According to him, they resolved to support Jonathan after a careful performance analysis since assuming office in the last four months. They noted that some of the economic and socio-political problems that confronted the nation in the past, which appeared insurmountable, have been solved. Some of the economic problems they noted include: perennial fuel shortages, power generation which is seriously receiving presidential attention, implementation of the terms of post amnesty programme of the Niger Delta region, among others.

Again, the group maintained that a careful perusal of President Jonathan's odyssey including his ascendancy to power reflects the true meaning of his name 'Goodluck'. 'Obviously, there is no doubt that God has packaged Jonathan to lift Nigeria from the pit of backwardness to the rostrum of development,' the group said.

However, the group went further to observe with great interest the president's quiet but focused disposition, loyalty, respectability, sound intellect and high leadership ability. The group observed that all these rare qualities distinguished the President from other presidential aspirants hence their resolve to support him in 2011. The President, they said is a detribalized Nigerian who has shown enough evidence that he has outgrown cultural and tribal barriers which makes him the most suitable for the office of the President come 2011.

On zoning, the group maintained that it is not only unconstitutional but retrogressive. He, however, advocated for a level playing ground where every aspirant would be given equal opportunity to contest. They labeled those zoning as anti-Nigeria and ethnic bigots, and advised them to rise above parochial and mundane issues.

…As group gives reasons for support
Mr. Emola Andrew is the Secretary General of the Lagos State Chapter of the Middle Belt Forum and a die-hard loyalist of President Gooduck Jonathan. He spoke to CHINELO AGINA on the position of the middle belt on Jonathan's presidency and his chances in 2011polls. Excerpts

Our focus
Since the independence of this country, the middle belt region has been largely marginalized. Most often, we are denied the oppourtunity to benefit from the resources of the country. If you take a tour to the region, you will find out that most of our areas are underdeveloped, while some other parts of the country are developed.

We have suffered this injustice for long. Based on this, we decided to come together and form a body through which our agitations will be addressed. A body that will represent the ideals of the people, and that was how the Middle Belt Forum was born. This middle belt in question comprises Adamawa, Taraba, Kogi, Benue, Plateau, Niger, Southern Borno and Southern Kaduna state.

The stand of the middle belt on zoning
I am speaking the stand of the totality of those from the middle belt. We are standing on the side of people like Solomom Lar, Theophilus Danjuma, Air Commodore Dan Suleman and others who are our leaders. After the meeting, we had in Abuja in 2005, we resolved that any of our sons from the middle belt or the South-South that declares interest in the presidency, we are going to support him. That is why anytime Jonathan declares his plan to run; we have resolved that we will give him our full support.

Our fears for the North
I foresee a situation where Nigeria will divide into two after Jonathan rules for the next eight years. Apart from General Yakubu Gowon and Olusegun Obasanjo, since the independence of Nigeria, the North has ruled for 35 years. Jonathan was very loyal to the late President Umaru Yar'Adua, and we believe that God has ordained him this time for him to be on top.