NIGERIANS AT WAR IN ENGLAND 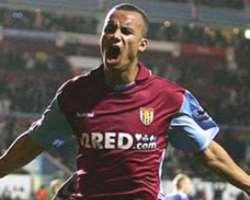 Agbonlahor
Four Nigerians will engage in a battle in England today when Everton takes a trip to Villa Park to confront Aston Villa in their third match of the 2010/11 Barclay Premiership season.

Nigerian trio of Joseph Yobo, Yakubu Aiyegbeni and Victor Anichebe in Everton colours are expected to file out against their compatriot, Gabriel Agbonlahor, who plays for the Villa outfit. Agbonlahor and Young will lead Villa's attack to salvage their image, which was shattered last Sunday by Premier League returnee, Newcastle United, which humiliated Aston Villa with six goals in one of the surprised results of the early season.

Aston Villa, placed 12th on the table at the close of last season, will be steaming hot to prove to its teaming fans that it is equal to the task of playing in the big league this season, while Everton will capitalise on the humiliation Villa suffered last week to compound its woos in order to improve on the log.

However it goes, four Nigerians will be on parade in this game to showcase their talents and help their respective sides secure victory to advance on the league table. As the battle rages, fans of the English Premier League sides will have no dull moment.

Today's match is going to be very tough because record has it that any meeting by both sides has always been too hot. It will be their 191st meeting in history. Their last three league games ended in a score draw and the Villans are unbeaten in eight league meetings with Everton, but the club has lost three of its last four Premier League games.

Everton has failed to score in its last two away matches. Despite taking a penalty kick, John Carew has yet to get any of his eight shots in the league this season on target. Three of Everton's last five league goals came in the 90th minute or later.

If Everton wins this game, the league's head-to-head record will be even between the two sides, with 71 wins each. Since 1987, Everton has won only once away from home at Villa.

Today's encounter may likely end in a draw.