STARS SET TO SHINE AS MAMA BERTHS IN LAGOS 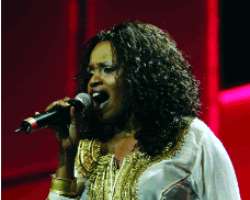 Amani performing at 2009 MAMA Awards
Africa's most outstanding musicians will once again have the spotlight beamed on them on December 11, 2010 when the MTV Africa Music Awards (MAMA) berths in Lagos. It will be a celebration of contemporary African music and creativity.

Organised in conjunction with Bharti Airtel (formerly Zain), the MAMA, which holds at Eko Expo Hall, Victoria Island, Lagos, will take the form of a stunning live music event and global television spectacle, featuring performances from contemporary African and international music giants and hosted by a major music celebrity.

While speaking at a ceremony to announce the return of MAMA to Nigeria during the week, a visibly elated Deepak Srivastava, Chief Operating Officer, Airtel Nigeria, says artistes from around the continent will battle to win a coveted MAMA trophy in one of 12 award categories including: Best Male, Best Female, Best Video, Best Group, Artiste of the Year, Best Lusophone Act, Best Anglophone Act, Best Francophone Act, Song of the Year, Brand: New Act, Best International Act and MAMA Legend.

'All of us at Zain Nigeria are extremely delighted to play host again to the biggest and the best celebration of African artistes and music. The fact that MAMAs is returning to Nigeria after it made its debut in 2008 at the Velodrome, National Stadium in Abuja is eloquent testimony to the importance of Nigeria in Africa - both in telecommunications and in music and entertainment,' Srisvastava says.

Commented Alex Okosi, Senior Vice President & Managing Director, MTV Networks Africa: 'We are thrilled to be partnering Airtel to bring the MTV Africa Music Awards with Airtel to Lagos for the first time and look forward to delivering the most exciting MAMA yet on December 11.'

Conceived in 2008 as the ultimate celebration of African contemporary music talent, the MTV Africa Music Awards with Airtel provides a major promotional platform for the African music industry, championing, supporting and empowering African talent by broadcasting their music around the world via MTV's global multimedia network.

But now Airtel's sponsorship of MAMA will provide the telecommunication company with unique brand exposure across multiple platforms including live event activations across the continent.  A key component of the partnership will be the development of exclusive mobile and data content for the Airtel subscribers in sub-Saharan Africa including wallpapers and various downloads.

The campaign will also be fully activated in the digital space with a bespoke mobi-site (mtvmama.mobi) and a dynamic website (www.mama.mtvbase.com). Multiple SMS voting and interactive mechanics will be integrated into the campaign, to provide Airtel customers with unique access to the MAMA initiative.