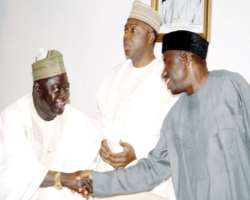 The governors Tuesday’s meeting which held at the Kwara State Governor’s Lodge, Asokoro, Abuja started at about 9.pm, an hour later then the scheduled 8.pm. The governors had convened to reach a consensus on a presidential candidate for the party.

Nigerian governors are usually very influential in deciding who gets what in the ruling party because of their huge state budgets.

Jonathan needs the backing of the governors to secure his party’s nomination and subsequently, win the general election.

The ruling party two weeks ago, ruled that it would retain its power sharing arrangement between the north and south but said, President Jonathan, who is from the south, could contest in the poll.

After more than three hours of deliberations into Wednesday morning, the governors failed to unanimously back President Jonathan’s presidential bid in 2011. Reports say the governors were strongly divided on Jonathan. The governors of Kwara, Zamfara, Katsina and Kebbi are said to be strongly opposed to Jonathan’s bid.

The governors failed to issue a communiqué at the meeting which ended at about 1.a.m on Wednesday morning.

Meanwhile, Cross River State Governor, Senator Liyel Imoke today said in Calabar that the influential PDP governors would back Jonathan for 2011 when he declares.

Imoke who spoke to journalists in Calabar said PDP governors would meet with President Jonathan in Lagos tomorrow (Thursday) as part of the President’s consultation on his presidential bid.

President Jonathan’s meeting with PDP governors will be the second in two days having first met on Monday night at the Presidential Villa, Abuja.

Imoke explained the influence and power of governors in Nigeria’s power equation since 2003 adding that the group has become a stabilizing factor in Nigeria’s young democracy.

"Our influence did not start today. It was not by accident. If you look at what happened in 2003 and 2007, the governors were very visible in political activities of the country. In fact in 2007, governors emerged both as the President and Vice President. So if you consider the crucial role we play in the sustenance of this democracy, you won’t say we are too powerful."

He assured that the governors from the south are fully behind Jonathan having endorsed him at a stakeholders’ meeting in Port Harcourt a few weeks back.

Sources close to President Jonathan’s camp say the opposition amongst a few PDP governors to the president’s 2011 bid has been responsible for the delay in the official announcement of the president’s bid.