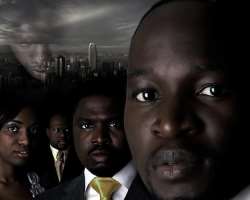 Nigeria movie producers in the Diaspora are gradually coming back home, enriching Nollywood with high technologies and expertise in movie production. We have seen them pull it off in movies like Ije, Tenant and the likes; here they come again with another blockbuster movie D'Comeback. Shot in the US, and first premiered in April, 2010 in Bethesda, Maryland.

Set to be premiered in Nigeria on the 29th of September, D'Comeback is an infusion of dance, drama, action, romance and comedy loosely based on the biblical character David with a modern twist. It showcases the life of David, who through extraordinary leadership is able to influence the lives of many and gain their support and devotion. The film reveals that the biggest challenge of man is the fight within, against his own lust and pride.

According to Prominent Cease Entertainment the producers of the movie, the aim of the outfit is to produce good movies that will pass a positive message to the people.

“As Africans in the Diaspora, we seek to bring critical acclaim to the African movie industry by producing movies that go against the current norm: our movies will have good sound quality, interesting story line, good acting and send a positive message to our community”. Wale Odusanya the spokesperson for Prominent Cease Entertainment said.