FURORE OVER CREATION OF STATES 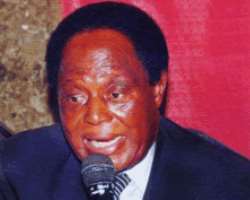 Mbu
If the recent statement of Senate President, David Mark is anything to go by, then the country may soon witness the birth of new states. Following the conclusion of the 1999 Constitution amendment by the legislature, Senator Mark assured Nigerians that the next issue which the upper chambers will tackle will be the creation of new states. Though his statement had been greeted with criticisms, he maintained that the creation of new states would bring development closer to the people.

Senator Mark was quoted as saying that 'creation of more states to address the imbalances in the federal structures and ultimately meet the yearnings and aspirations of our citizens informed the need by National Assembly to give the exercise a prime attention in the review of the 1999 Constitution.'

In the history of Nigeria, creation of states had been done by military regimes. Gen Yakubu Gowon was the first Head of State to create 12 states in 1967 from the four existing geographical regions: Northern, Western, Eastern and Midwestern. By 1976, seven mores states were added to become 19. In 1987, the number increased to 21 under the leadership of Gen. Ibrahim Babangida and by 1991, they were 30. The regime of the late Gen. Sani Abacha created six more states, bringing the total number to 36.

More states
The rationale usually given for the creation of new states was to give every region a sense of belonging. Those in support of state creation believe that when more states are created, there will be a balance and it would generate employment.

One of those in support of state creation is the former Minister for Foreign Affairs in the First Republic, Dr. Matthew Mbu told Daily Sun that the advantage of state creation that it brings development closer to the people and it gives them a sense of belonging.

Mbu, who had been at the forefront of the agitation for the creation of Ogoja State from the present Cross River is confident that if states are going to be created, Ogoja State will be given much consideration.

According to him, 'when Ojoga was under Afikpo province, I was pressing for the creation of Ogoja State, because I believe that creation of states would bring development closer to the people. Unfortunately, I did not get the needed support from my people. When eventually Cross River was created, Ogoja was merged into it, and Ebonyi which is not as large as Ogoja, was given its own state.

'In the absence of federalism, creation of new states helps to create a balance in the country, and it would create an avenue for more employment.When the National Assembly was receiving papers from those agitating for state creation, I presented mine and I was told that among all those who came, mine was the best. I hope the Senate will give it consideration.'

Other arguments are that many of the states that are existing are not viable as they can hardly generate sufficient internal revenue to cater for their developmental needs.

More often than not, new states are seen as rewards and incentives to influential politicians with the right connections, who champion the state creation.

Dr. Joe Okei-Odumakin, the President of Campaign for Democracy (CD), agrees with this view. While speaking with Daily Sun, she stated that the only way that Nigeria can move forward is if it goes back to being a federating unit.

Her words: 'It is very unfortunate that most of the states that are existing are not viable, that is why we are advocating that Nigeria returns to true federalism. How many of these states can generate revenue for themselves? Most of them just exist on the allocations that they get from the Federal Government because they cannot exist on their own. Instead of these numerous states which cannot afford to stand on their own, the country should be reduced to not more than six states. Better still, we are calling for a Sovereign National Conference (SNC) where Nigerians will contribute and air their views on how they want the nation to be run.'

One of those who support the call for true federalism is the former military administrator of Lagos State, Admiral Ndubuisi Kanu(rtd). He believes that federalism will be the panacea to Nigeria's problems. However, he said that if states should be created, the South-East which has five states compared to other regions, each of which has six states should be given one more so that there will be a balance.

Kanu told Daily Sun that this country at one point had constitutions in the various regions, but right now, they say the National Assembly amends the Constitution, and I ask, which Constitution? We have something we are using, but it should be seen as a working document, a passing phase and not a constitution.As at now, there is no group in this country that can say it is happy with the way the country is going. There is none. The Igbo want a federal Nigeria, for the interest of all of us.

'If eventually, the government wants to create more states, they should make sure there is a balance.The South-East has only five states, while other regions have six each. There should be a balance, one more state should be added to the south east. if two states will be created in every region, it means that three states should be created in the East.'