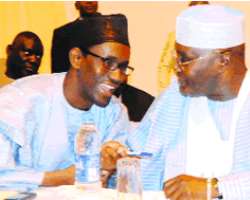 Atiku & Ribadu
Former Chairman of the Economic and Financial Crimes Commission (EFCC), Mallam Nuhu Ribadu, on Tuesday revisited the June 12, 1993 presidential election, describing its annulment as a robbery. Ribadu, who spoke in Lagos at the public presentation of a book, Diary of a debacle: Tracking Nigeria's failed democratic transition (1989-1994), written by a literary scholar, Dr. Olatunji Dare, said annulment of the polls won by the late Basorun MKO Abiola amounts to political corruption.

Ribadu found an ally in former Vice President Atiku Abubakar, who described Abiola, who died in the quest to claim the presidential mandate given by 14 million Nigerians, as a martyr of democracy. The former Vice President and ex-EFCC boss were not associates in the Obasanjo administration when the anti-graft agency and Atiku slugged it out over the Petroleum Development Trust Fund.

The former EFCC boss, who stated that 'June 12 issue was too important to be treated with levity,' however, debunked the impression that its annulment was supported by 'our brothers and sisters from the North,' declared that the annulment was purely the handiwork of a very few people, who he described as die-hard opportunists.

'It is the biggest lie of the world to say that the North had hands in the annulment. We all voted for him and he won clear and clean. The annulment was the handiwork of a few people, who always look for opportunities from our collective misfortune for their own advantage like the June 12, 1993 crisis,' he emphasised.

The June 12 issue, Ribadu asserted, was never a sectional thing, adding that 'the annulment was a political robbery because it robbed 14 million Nigerians of the mandate freely given to the late Abiola.

'He was the right person to vote for. He had wealth and used it for humanity. His wealth got to some remote villages even in my state, Adamawa. Why shouldn't he win? We voted for him and he won clean and clear,' he submitted.

While describing the late Abiola as 'eternal hero,' Ribadu urged Nigerians to always pledge loyalty and support for those who paid supreme sacrifices to guarantee the prevalent peace and stability the country was enjoying now.

He, however, thanked God that the crisis did not consume the country, stating emphatically that 'we nearly lost Nigeria to the annulment because people have been moving across the country towards their hometowns.'

Against this backdrop, Ribadu called on Nigerians to impress it on the Federal Government to do something in recognition of Abiola's contribution to democracy in Nigeria.

On the preparation for 2011, the former EFCC boss challenged all and sundry to stand up to ensure fairness, equity and justice, stating enthusiastically that 'a new Nigeria is possible.'Atiku, in his own goodwill speech, stated that from the onset, 'many Nigerians never trusted the transition programme of General Ibrahim Badamosi Babangida,' saying one of the people that doubted the sincerity of the programme was his late mentor, General Shehu Musa Yar'Adua.

Atiku explained that the late Yar'Adua, at a meeting in Kaduna advised the delegates to vote for Abioal instead of either himself (Atiku) or Ambassador Babagana Kingibe.

Atiku said that Abiola was used to chase out the military, describing him and his late mentor, Yar'Adua as 'martyrs of democracy.'

The presenter of the book and former Lagos State governor, Asiwaju Bola Ahmed Tinubu, in his speech, insisted that 'until the late MKO Abiola is recognised as the fourth democratically-elected President, justice has not been done.'

According to him, the book presented Babangida's steps, actions and statements that showed that he was not willing to quit office which led to the June 12 crisis, enthusing that 'the book will surely make a loud scream about the satanic roles played regarding that epoch by those in power or still hanging around the corridors of power.'

The host and Governor of Lagos State, Mr. Babatunde Raji Fashola (SAN), praised the courage of the late Abiola which he said made the existence of democracy in Nigeria possible.He, however, reminded that democracy was not the same thing as good governance, advising that as Nigeria was moving towards another election, people should make correct choice of candidates they were sure would bring good governance to bear on the people.

The author, Dr. Olatunji Dare, had said earlier that the book is dedicated to the 'memory of Bashorun Moshood Abiola, winner of the historic June 12, 1993 presidential election, who would have been 73 years old today, and to the spirit of June 12.'

According to Dare, 'the spirit of June 12 is the spirit of service and sacrifice,' adding that 'it exalts keeping faith with the sovereign electorate over and above considerations of personal gain and comfort, over self-preservation even.'

One of the widows of Abiola and the former Managing Director of the defunct Concord Press, Dr. Doyin Abiola, who was present, described her husband as an ideal man, who craved for balance in whatever he did.

Present at the event were creme de la creme of the society mainly from the media and political circle.