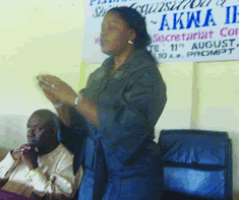 In a matter of time, there may be no beggars in the streets of Uyo and all other parts of Akwa Ibom State.

No, they have not been officially banned yet by the state government, but there are programmes to get the destitute off the streets, even as other less privileged persons are to be empowered to fend for themselves with dignity.

The National Directorate of Employment (NDE) in the state has already begun that programme through the training of physically challenged persons, widows and other less privileged people in the state.

The state coordinator of the NDE Mr. Joseph Modey, mentioned that the training programme is specifically designed for persons with special needs and other vulnerable groups such as; the physically challenged, widows, widowers, victims of flood/ erosion, displaced persons, orphans and sex workers.

Modey, who disclosed that the objective of the programme is to recruit 1,850 trainees nationwide, said that 50 trainees are to be recruited in Akwa Ibom and trained on some marketable trades such as tie and dye, shoe and leather works, soap production, industrial tailoring and hair dressing.

To make the training relevant to the participants, the coordinator revealed that trainees will, at the end of the programme be equipped with starter packs that will enable them to be self employed so as to contribute meaningfully to national development.

The skills, according to him is intended to reduce unemployment, street begging, armed robbery and other social vices in the society, as well as remove disillusionment among vulnerable and physically challenged persons.

He, therefore, advised participants to justify the gesture by taking full advantage of the programme to improve their means of livelihood. Disable persons in Akwa Ibom State have been charged to get out of the morbid shelve of incapacitation, to embrace any opportunity to be trained for self reliance.

The state Governor, Chief Godswill Akpabio who was represented on the occasion by his Women Affairs Commissioner, Mrs Eunice Thomas, told disabled persons in the State to get out of the morbid shelve of incapacitation, to embrace any opportunity to be trained for self reliance.

He said the participants should take full advantage of the programme so as to derive the desired benefits, adding that their disposition is not an excuse for any form of distraction during classes.

Akpabio who called on every able member of the society to lend a helping hand to the less privileged, however, advised the less privileged to make themselves approachable by not becoming overly weighed down with their disposition. He gave an assurance that disability does not make them lesser than any other Akwa Ibom child.

He commended NDE for putting up the programme as one of its drives towards reduction of unemployment and promised to continue to partner with them and other relevant bodies to reduce unemployment to its barest minimum.

Last month, the directorate had empowered 10 women in the state with N40,000 each through a programme known as Women Employment Branch (WEB).

The women formed a fraction of more than 500 women in the state who have so far benefitted from the programme which involves training in income generating skills like event management, interior decoration, creative dressmaking and fondant cake production.

Apart from the WEB beneficiaries, 14 other persons were also given equipment to start business in their respective fields of trade which training was equally sponsored by NDE.

The NDE state coordinator, Mr Modey, then had said that more than 30, 000 youths in Akwa Ibom state had so far benefitted from various employment generating programmes of the Directorate since its inception in 1986. He said the 500 women beneficiaries of WEB were part of part of the 30,000.

According to him, NDE as a child of circumstance at inception, has in recent times become a destiny for positive change in the life of many Nigerians, as such the agency has felt a sense of fulfillment as it has successfully carried out one of its mandate of bringing down the level of unemployment in the country.

'This implies that over 14 unemployed persons will now not only become self-employed but employers of labour and contribute toward the reduction of unemployment in Akwa Ibom State and Nigeria at large,' Modey said.

The Director General of NDE, Mallam Abubakar Muhammed, in an address he sent to the occasion, said Nigerians were at crucial time in the nation's evolution where youths were being exposed to uncertainties of life because of unemployment.

'By choosing to undergo training in skill acquisition, the beneficiaries today have been saved the temptation of falling prey to the deviant behaviours common to the unemployed in Nigeria. It is heartwarming to note that these one have become the next generation of skilled artisans to service the economy in their various vocations.

'At this point in time, the importance of the empowerment of skilled youths cannot be overemphasized, given the commitment of the current administration in ensuring that the country develops technologically especially in the area of human capacity development, and becomes one of the 20 leading and largest economies in the world by the year 2020, Muhammed said.'

Responding on behalf of the WEB beneficiaries, Mrs Felicia Bassey thanked the government for ensuring that women were partakers of the programme, especially, by helping them become full time workers thereby contributing to the development of the family.

Anietie Ukpeh, who spoke on behalf of other beneficiaries of skill acquisition programme also praised the Federal Government and the NDE for providing them with skills and tools to break out of the unemployment cyst. He promised that they would make proper use of the equipment.