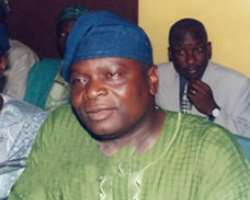 The Action Congress of Nigeria (ACN) has cried out over alleged plan by the Osun State Government to implicate its leaders in the state over the 2007 bomb explosion near the office of Gov. Olagunsoye Oyinlola. The party described the plan as a ploy to destabilize and silence them ahead of the 2011 general elections.

In a statement issued in Lagos on Sunday by its National Publicity Secretary, Alhaji Lai Mohammed, the party said as part of the move to harass the opposition in the state, especially the ACN, the state Attorney-General had rushed to court with a concocted charge against ACN chieftains, without any evidence linking them to the crime whatsoever.

''With the next elections looming, the latest onslaught is specifically designed to distract ACN leaders from focusing on their campaign and possibly incarcerate them through very stiff bail conditions on the offence of murder, while the principal suspect is made a state witness. This is all about political vendetta, not justice.

''We are, therefore, compelled to call on the state judiciary to resist any attempt to use it as a tool of political vendetta, victimisation and harassment. The judges should critically look at the evidence before them and promptly refuse any consent for trial or victimisation of the opposition.

''The Nigerian courts are known for their independence and doggedness in defending the rights of the oppressed, and this is another opportunity for them to stand for justice. We implore all legal authorities to ensure that justice is done in this matter to ensure safety of Nigerians during elections,'' ACN said. The party said several police investigations into the June 14, 2007 bomb blast in a car with registration number ONDO-AL850 NND, which claimed

the life of one of the three occupants of the car, had absolved ACN chieftains of any complicity.

It also said while the sole suspect, Richard Adesanmi, was arraigned before a magistrate court and ordered to be detained at the Ilesha prison, the same suspect was now being kept in an Osun State Government Guest House, where he was feeding fat at the expense of taxpayers. 'The suspect ended up in the guest house even though a shocking application by one ASP Adekunle Ayuba of the Osun State police command, a regular character in opposition victimisation and an errand boy to Gov. Oyinlola, had sought – at the magistrate court on March 10, 2008 – the suspect's transfer to police protective custody.'

ACN said the latest decision by the Attorney-General to concoct charges against its chieftains followed a supposed confessional statement by the suspect, still guest of the Osun State Government, indicting ACN leaders whom he said he never met physically, but named in a mysterious diary belonging to his dead accomplice.

''The genesis of the latest move by the state government is that since the state Attorney-General has failed to charge the suspect to the appropriate court, three years on, but rather preferred to implicate ACN members in order to disparage them, the ACN governorship candidate in the 2007 elections, Mr. Rauf Aregbesola, petitioned the Inspector-General of Police in Abuja to take over the file, re-investigate the matter and prosecute the culprit via letter dated and acknowledged by force headquarters on August 12, 2010.

'On August 18, 2010, an unequivocal and unambiguous police signal was sent to the Osun State Police Command, which was received the same day at about 1.20 p.m., ordering the transfer of the case file and the suspect to Abuja. It is to forestall this transfer that the Attorney-General has now decided to thwart the course of justice by moving to charge innocent people to court over an offence they did not commit. 'We call on the Presidency to show interest in this matter and not to allow the shielding of criminals who engage themselves in a heinous crime,'' the party said.