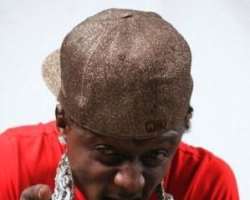 The Ginger or is it 'ganja' the swagger artiste, Terry G was said to have engaged in another street fight with one of the nation's comedians called 'I No Go Die”. The reason for the fisticuffs, we learnt, is unconnected to a certain song, “Wetin Dey Do You” released by the humourist where he allegedly hit the popularly but very controversial artiste, Terry G.

When the song came out, we learnt that, I No Go Die, avoided Terry for sometime until he was said to have been 'kidnapped' by Terry G's 'boys' and whiskered to his studio in Fagba area of Lagos where they seriously dealt with the comedian.

As you are reading this, I No Go Die and Terry G are two separate lines that may never meet. I No Go Die, we were told, has been keeping at least, 100 metres distance from Terry G and his 'boys' to avoid being 'kidnapped' again by them.