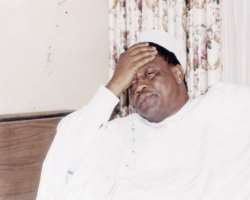 
ABUJA, August 22, (THEWILL) - A Coalition of civil society groups has petitioned the governor of the Central Bank of Nigeria (CBN), Mallam Sanusi Lamido Sanusi to ensure the release of the original copy of Dr, Pius Okigbo report as well as a comprehensive statement of account relating to the spending of $12.4 billion dedicated accounts between 1988 and 1994.

In the petition dated 22 August 2010, the coalition said that, "Following the request from the Attorney General of the Federation and Minister of Justice, we worked very hard to obtain a copy of the Okigbo panel report, and forwarded the report to him. Subsequently, Mr. Adoke set up a panel to verify the authenticity of the copy we submitted but the panel was reportedly unable to fulfill this task citing its inability to find and locate the original copy of the report despite its requests to the Secretary to the Government of the Federation.

The coalition appealed to Sanusi to "use your leadership and good offices to urgently ensure the public release of the original copy of the Okigbo report, and to hand over the copy and/or provide a comprehensive statement of accounts relating to the spending of $12.4 billion (Dedicated accounts for 1988-1994) documented by the panel to the Attorney General of the Federation and Minister of Justice, Mohammed Adoke, SAN, for appropriate legal action."

The groups also said that, "We are seriously concerned that despite the huge taxpayers’ money spent on the operation and work of the Okigbo panel, successive governments have failed and/or neglected to release the report, and to bring to justice suspected perpetrators of allegations of corruption and mismanagement documented in the report. This situation has continued to diminish public confidence in the outcome, efficacy and usefulness of subsequent public inquiries.

"Earlier this month, we gave the government of President Goodluck Jonathan 7 days to find and locate the original copy of the missing report. But we have decided to give the government sufficient time and opportunity to respond appropriately to our request by releasing the report, and taking the necessary legal action to ensure justice on the allegations of mismanagement documented in the report," the groups further said.

The groups said that they "remain concerned that the mismanagement of the $12.4 billion had continued to undermine the value of the naira for many years, precipitating underdevelopment and poverty, and impacting negatively on the living standards of millions of Nigerians, especially the most vulnerable sectors of the society. We note that the legacy of the mismanagement of the $12.4 billion is still with us today, thus making it difficult for successive governments to significantly reduce poverty in the country or for Nigeria to meet its commitments with respect to the UN Millennium Development Goals (MDGs)."

"We believe that given the staggering amount involved and the debilitating impact it has had on the economic and social development of Nigeria, it is in the public interest and in the interest of justice for the original copy of the report to be released, and for the government to take appropriate legal action on the report."

The groups also said that, "We recall the pledge by President Goodluck Jonathan contained in his statement of February 9, 2010 to the effect that he would "tackle the prevailing culture of impunity in Nigeria" and "more robustly" prosecute the anti-corruption campaign. The President also said that, "One of the cardinal commitments of this administration is our commitment to Good Governance, Accountability and Transparency. We shall continue to pursue these policy objectives with all the seriousness they deserve.

"But the failure and/or refusal of the government to release the Okigbo report or to trace, recover, repatriate and return to the treasury the $12.4 billion allegedly mismanaged, and to prosecute suspected perpetrators has continued to raise questions as to the government’s political will to implement these commitments in good faith, and thereby fulfilling Nigeria’s national and international human rights and anticorruption obligations and commitments including under the UN International Covenant on Economic, Social and Cultural Rights and the UN Convention against Corruption, to which Nigeria is a party," the groups stated.

"We are determined to pursue the release of the Okigbo panel report to a logical conclusion and to hold the government accountable to its commitments. Under Article 9 of the African Charter on Human and Peoples’ Rights which Nigeria has ratified, Nigerians have the right to information on the spending of the $12.4 billion documented by the panel."

The groups said that, "Given your own commitment as Governor of the CBN to eliminate alleged corruption and mismanagement in the banking industry, and to restore investors’ confidence, and position the banks to effectively discharge their duties to the economy, we trust that you will give our request the priority attention it deserves.

"We hope that you will take action within one week of the receipt and/or publication of this letter. Otherwise, we will have no option but to take all appropriate legal actions nationally and internationally to compel the government and all relevant agencies including the CBN to ensure the release of the original copy of the report; and full compliance with Nigeria’s voluntary international obligations and commitments," the groups also added.

The Okigbo report allegedly indicted the administration of former military dictator, General Ibrahim Badamasi Babangida (rtd) for corruption and mismanagement of $12.4 billion 1991 Gulf oil windfall. The dedicated and other special accounts were managed by the then Head of State and the then Governor of the Central Bank of Nigeria.