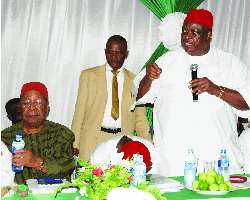 For whatever motive it was conceived, the South East political summit by the time it was scheduled was quite apt and welcomed by many. The issue of whether zoning should remain or be jettisoned ahead of the 2011 general elections had become a national debate that it would not have been out of place for the zone to take a stand.

However, the quick turn around by the conveners, especially the announcement canceling the event, and which was credited to the Deputy Senate President, Ike Ekweremadu raised so many questions about the genuine intentions of the proposed summit in the first place; if it could be cancelled merely because the PDP had taken a stand on the vexed issue of zoning.

While people were still wandering about what may have happened, another conflicting announcement started making the rounds that the event was to go on as scheduled. In the confusion, political observers began to develop such idea that the proposed gathering could as well be another political gimmick by some politicians from the zone to score some cheap political points.

Whatever may have been the truth, the announcement by Ekweremadu marked the end of the summit. Those believed to be the main organizers and financiers had pulled out leaving members of the planning committee led by a former governorship aspirant in Enugu State Chief Ugochukwu Agballa in the lurch. But the splinter group decided to go ahead insisting that the summit after all was not a PDP affair.

The group seized the Imeobi meeting of the Ohaneze which held the weekend preceding the summit to re-launch a fresh campaign to convince Igbo leaders that the event would go on as scheduled. Chief Emmanuel Iwuanyanwu led the campaign at the Ohaneze meeting calling on the apex Igbo body to adopt Dr. Jonathan as its candidate for the 2011 presidency. Although Ohaneze did not take such a decision at the meeting, it however agreed that the issue was an important one that calls for consultations amongst the people of the zone.

The Governors
The governors of the South East were the first to announce that they were not interested in the presidency and would neither present themselves as running mates to any of the presidential aspirants. The Governors' Forum had after one of its meetings in Enugu said they would rather support any candidate that would protect the interest of the people of the zone.

The governors' have, however, been criticized for trying to speak for the Igbos without first consulting with other stakeholders. All eyes were thus on the governors ahead of the proposed summit; people wanted to know their stand but it was all disappointments when the governors' emerged from their meeting on Sunday August 15, 2010, a day before the summit and refused to say a word.

The chairman of the ForuM, Peter Obi of Anambra State told newsmen in Enugu that they could not discuss the issue due to the absence of Abia and Imo governors. The inability of the governors to take a stand on the summit led to such a speculation that they might have disagreed on whom to support for the presidency come 2011. A source told our reporter that one or two of the governors are more disposed to a Northern candidate rather than Jonathan and could not agree at the meeting.

But another source and politician from Enugu confided in this reporter that the governors felt that the event was being sponsored by the South-South elder statesman, Edwin Clark and questioned why he should be the one to organize a summit for the zone. 'Why do you think they held such an important event at the Presidential Hotel rather than Okpara Square?'

The Summit
It was thus not surprising when all the governors of the five states of the zone, members of their executive council, members of the Houses of Assembly, Local government chairmen, members of the National Assembly, councilors all stayed away from the event. Also the Ohanaeze leadership and other Igbo bigwigs and stakeholders were nowhere near the Presidential Hotel that Monday, August 16, 2010. Elder statesman and chairman of the summit, Chief Mbazuluike Amechi, former governor of Anambra State Chief Chukwemeka Ezeife, and Dr. Emmanuel Iwuanyanwu who arrived early for the event were not deterred by the absence of the governors as they went ahead and ensured that the summit succeeded.

Reacting to the absence of the governors, Barrister Nwafor Orizu, a constitutional lawyer, who featured in such prominent cases as the Andy Uba and Apo six cases said, 'One of the reasons why I came and was happy with the summit is that the governors and senators were not there. Yes, because for the first time we the people were able to talk; some of them take positions for us, they call it Governors' Forum, it's not in the constitution and their legislatures didn't give them mandate, they are speaking for themselves alone.

They didn't discuss or have any village meeting with us; they take positions on our behalf. Don't you see what the North does, if they have a meeting, its Arewa meeting, the governors will be there and the people will be there. Our governors take decisions without telling us and I am very pleased they were not here; if they were here I wouldn't have spoken.

Chairman of the event Mbazuluike Amaechi, had set the ball rolling by urging the people to support Jonathan for presidency in 2011. His reasons were very simple; 'No sitting president has ever lost an election in African history, therefore it will not be wise to support a candidate we are not sure can win the election next year. Also, there is no guarantee that the militants in the Niger Delta have thrown away all their weapons and guns, and will not re-group and return to the creeks should Jonathan not continue in 2011.' He noted that moreover, the North has dominated in the leadership of the country having ruled the country for over 38 years.

He argued that Ndigbo have played the second fiddle so long a time and should stamp their foot and take their destiny in their hands by supporting Jonathan.

The elder statesman noted that the South-South were part of the old Eastern Region and so it would be better for the Igbos to support their brothers 'so that in turn they will deal with us when it is time for Igbo presidency.' He however stirred up a controversy when he traced the love lost between the two regions to the replacement of Eyo Ita with Dr. Nnamdi Azikiwe as the Premier of the Eastern Region, a position which Delta State born conflict scholar, Mr. Emma Okocha who represented the United States Igbo Diaspora countered. Mbazuluike had called for Igbos to support the South-South as a way of placating them over Eyo Ita but Okocha called for caution insisting that, Igbos never cheated the South-South.

'Eyo Ita was made the government premier here because he is a minority; but ask them, Akpabio was the Minister of Education because University of Nigeria was installed. The greatest African, the greatest Nigerian, the greatest Igbo man was Dr. Nnamdi Azikiwe, anybody telling you any other thing is a liar.

'He won election in Western Nigeria, and the NCNC party decided that Eyo Ita must give way; not only Eyo Ita, Professor Eni Njoku, all of them left government. The history is that NCNC decided that Zik should be returned to the East that everybody should give way, these people said no.

'Not only Eyo Ita, Professor Eni Njoku, all of them; K.O Mbadiwe that was the history. Who is telling you that we marginalized them? Every industry built in Enugu was also built in Port Harcourt, Ogoja and Calabar; Calabar had too many industries. So we did not cheat them. I am saying that for the Igbos to move left or right, those people should work hard, they should come here.

'We are not running for presidency any more; we wanted it since independence they didn't give us, so if they want the presidency let them come, let us show ourselves some respect and then present to them our articulated demands. Let them come to Enugu and beg you; have I seen any Ijaw group here? Have I seen any Northerner here? Why are you people so much interested in this election, are you the ones contesting? Why not you remain in Onuiyi Haven; they should come and beg, then you present to them your core interest.

'Also, we must publish the Oputa panel report because of the genocide issue; the North must apologize for what they did, not only in January 15, 1966, but also on July 29 where they poured acid into the mouth of every Igbo officer in Ikeja. Then if we are going to go to the Ijaw people, we are going to ask them why they have over the years stopped our presidential bid from Nnamdi Azikiwe to Ojukwu, to Iwuanyanwu to Ekwueme; who have stopped these people? It is this Edwin Clark; I know them, we leave in the same area.

'They have taken over Asaba; Asaba as the capital has nothing; they have even taken over all my sisters and my farmland with government money', he said. Chief Emmanuel Iwuanyanwu supported Amechi's stand identifying the issue of unity in Igbo land as a major problem. 'We need to have peace, unity amongst us and with our neighbours in the South-South; we are bigger and should find a solution to the problem. The north has created a formidable and very impregnable force by uniting the 19 states, with regular meeting. But the need for the South to come together has not been possible.

'Igbos, we are marginalizing ourselves; after this summit we should be able to take our destiny in our own hands. Nigeria is a federation and no federation can stand without zoning to protect the weak and smallest part of the federating units. There is zoning, and without it, we can't get Igbo presidency; Obasanjo won because he was supported by the military; we must insist on zoning, we need zoning, but we didn't anticipate that a president will die in office. 'Jonathan is sitting on the same ticket and any attempt on that is like a cancer. Our party, the PDP has met and he is allowed to contest with the ticket; the only person who can rule for four years is Jonathan because he is constrained by the constitution. If he is not allowed, it will cause serious social problems.'

In support of Iwuanyanwu's argument that only Jonathan will not look for a second tenure, Nwafor Orizu said, 'we are going to support Jonathan because of force majeure; the North has been talking about their turn forgetting that what they did was that the president should go to the North and South, Vice President. If the president dies; was he killed by Jonathan, no; so, when act of God intervenes, you change the position', he said.

He urged the North to wait because 'Jonathan cannot have more than four years because the constitutional position is that no Nigerian can become a president for more than eight years and you cannot fractionize tenure; and to say that a Vice president is not elected is ignorance because that is why Atiku could not be removed.