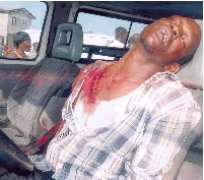 Jude
If only Jude Ozomaro knew what fate had in store for him, he would not have gone to work that fateful day. But fate played a fast one on him.

Jude, a 28-year-old bus driver from Ozoro in Isoko North Local Government Area of Delta State, was felled by police bullets on June 18, 2010 in the Iyana Isashi area of Lagos State.

According to his elder brother, Davies Ozomaro, who spoke to Sunday Sun, Jude was shot and killed in cold blood at a police checkpoint for allegedly refusing to part with N50.

How it happened
Sunday Sun investigation revealed that Jude, a commercial bus driver who plies the Volks-Airport road route on Sunday, June 18, closed from work about 2pm, having discharged his last passengers at the Volks bus stop.

He was driving home alone until he got to Iyana Isashi where he lives. A stop-and-search police team stopped him and allegedly demanded for N50 from him but he reportedly told them he didn't go to work that day. The policemen were said to have threatened to take the bus to their station, for which he demanded to know his offence. He reportedly entered the bus and drove off with his conductor.

An eyewitness said his action infuriated the policemen who got into their van and chased after him. They eventually shot at his bus tyre, forcing Jude to stop. At that point, they shot at him again through the back windscreen. The bullet shattered the windscreen and went straight into his chest through his back. As it turned out, that was the fatal bullet that killed him.

According to his elder brother, 'he was still breathing when people got there but the policemen that shot him initially prevented the crowd from rescuing him. That was what happened.

'Somebody called to inform me that my brother had been shot dead by the police.

I didn't believe the news until I called his phone and a strange voice picked it and told me that the police had shot the owner of the phone and he was dead. It was then I rushed to the place and found my brother dead in a pool of his own blood, right on the steering.'

The policemen vamoosed
It was gathered that when the policemen saw that Jude was dead, they ran away to their station.

'He was left behind the steering until we came and took pictures of the body before the bus was towed to the Area 'E' Police Command in Festac Town. 'It was at the command that he was brought out of the steering and taken to the mortuary. The following day, which was Monday, we were invited to Area 'E' to see the Commissioner of Police, Marvel Akpoyibo. When we got there, we found out that the Divisional Police Officer (DPO) of Iyana Isashi Police Station had already sent a message to the Commissioner that my brother, the slain driver, was an armed robber.

'But the commissioner refused to accept the information that he was an armed robber and insisted that it was a clear case of murder. He promised that whoever was responsible would go in for it.'

Policemen detained
Sunday Sun gathered that the four policemen responsible for the young man's death are being detained at the Force Criminal Investigation Department, Panti in Yaba, but their names have not been made public yet.

Speaking on the present situation, Davies said: 'Concerning my brother's body, nothing has been done. The police said an autopsy would have to be carried out first before the case would be taken to court. We are waiting for them. I have even called the hospital whose personnel said the autopsy would be done soon.

'Even though it is the duty of the police to ensure that the autopsy is done as soon as possible, I had to go to the hospital to fill the form so that it will be done as soon as possible because of the laxity on the part of the police authorities. As soon as the autopsy is done, the body would be taken away from the mortuary for burial because he is still a young man of 28 and he is not yet married.'

'All of them know him very well as somebody living in the same neighbourhood. I suspect there is something hidden. Although the commissioner of police gave us his word that justice would be done, you know in Nigeria anything can happen.'

The DPO's statement
When contacted on the telephone, the DPO said: 'This is not something to be discussed on phone and besides, the Police Public Relations Officer (PPRO), Mr Frank Mba, will be in a better position to comment on it.'

Efforts to reach Mba also failed as several calls to his mobile line rang through without being picked. He also failed to reply an SMS seeking his response on the matter at press time.