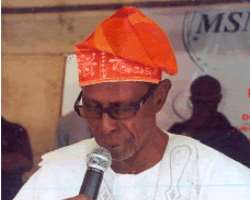 National leader of the newly registered Mega Progressive Peoples Party (MPPP), Chief Rasheed Adewale Shita-Bey was the Chairman of the Alliance for Democracy until he recently resigned to concentrate on building the new party. In this interview with Saturday Sun , he gave reasons why he decided to resign from the AD even though he is in position to influence his party as the national chairman. He argued that ASD is only one party while the Mega party is made up of 29 functioning registered political parties.

According to him, the man who initiated the formation of the Mega party was Chief Anthony Enahoro. He gave assurance that Enahoro is still very much with the Mega Movement but that he could not attend meetings because of his age.

He also spoke on other issues.
You were the chairman of the Alliance for Democracy (AD) and now leader of the new Mega Party, to which of these two do you belong?

I was not just the leader of AD; I was the national chairman of AD. I moved from AD to Mega Party and I have resigned from AD. I am now fully in Mega party. I am the national leader of the Mega Progressive Peoples Party (MPPP). You asked a question on whether AD is dead. I can tell you that AD is very much alive. Even though I am no longer in AD, I know that AD is alive.

Did all the officers of AD leave AD when you resigned?

Some of the officers of AD who have confidence in me left AD for Mega party when I resigned to join Mega party. But AD is still intact.

Nigerians would want to know, what influenced your decision to leave AD when you can influence its direction.

I opted for a new party, which is the Mega party because I believe being a new party; it has its own objectives. At the beginning, when the party was about to be formed, Chief Anthony Enahoro who was the initiator of the party called some of us to a meeting and there he asked us how we felt about the style of governance of PDP. We expressed disappointment and that led to the idea of forming a Mega party that will bring in new ideas that we have a government that will be a replacement for PDP. We all agreed that PDP was running a bad administration. We believed that the new party would run a good government. That is the reason I had to put all into the formation of the Mega party. That is how I became so involved to the extent that I became the national leader. The Mega party has been registered and approved by INEC.

What are the differences between AD and Mega party?

Nigerians would want to know, there are 57 political parties, how many parties are involved in the formation of Mega party?

Right now, we have about 29 parties in Mega party. As you know, it is not all the 57 parties you mentioned that are functioning.

Does that include the AD?
AD was functioning. In 1999 when we had a civilian election, AD had six governors. The party won all the South West States. It is true that through rigging by the PDP, we lost some of the States to PDP. Despite that, AD continued to function as a party.

Does the AD still have that electoral strength today?

Why do you think the Mega party is better than AD?

I have told you that the Mega party is coming up with a new orientation. It consists of many parties and the focus is to correct the lapses of the PDP. PDP has run a bad government and the idea of Mega party is to run a good government. As far as AD is concerned, AD is one political party and AD is now one of the parties that make up the mega party.

You said Anthony Enahoro started the idea of a mega party. Is he still with you?

Yes, of course, he is still with us in Mega Party. Even though you know that you have to consider the age of the man. You don't expect that he would be coming out like other young men. Alhaji Lateef Jakande is still part of the Mega Party. Yesterday he was at the world press conference and some reporters interviewed him.

What are the immediate priorities of the Mega Party?

The immediate programme is to have a convention after the world press conference we had recently. After the convention there will be launching of the party.

Is that going to be in Lagos?
I am not sure of where it would take place. But it will be Abuja or Lagos.