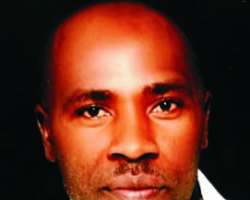 When the Nigerian motion picture industry otherwise known as Nollywood came to being, it had massive fan base which made it become a force to reckon with in the film industry around the world. While others remained as fans, Donald Okoli wanted to be more than just a fan. In this chat with AMARA OSAJIUBA, he talks about how he came into Nollywood amidst other issues.

MR. DONALD, from philosophy to movie production, what a great transition!
I also have an OND in Engineering, but decided to know if I can make it in acting, but my boss then said I cannot make it in acting as a man instead he would prefer I go behind the camera, then I decided to produce. Since then, I have been doing a lot of works and prefer working with people who know what they are doing because I am a stress free person and would not want anybody to stress me either

What then brought you into Nollywood?
I did not get in there by chance; I do come from Ibadan to attend the programme MEET YOUR STARS organized by HINT magazine, there I met Saint Obi and Sandra Achums. Actually we were four that usually attends that fan club, but it was only me, Earl and Sylvester Mmadu. That made it to the acting.

Most Nigerian movies lack suspense and continuity; one can easily predict what happens next, as a producer, how would you react to that?
Well, anytime I finish a movie, I call people to criticize and if there is any error, we re-shoot. There is no challenging story anymore, people keep recycling stories, there is no more professionalism in the industry, every Tom, Dick and Harry produces, we need to go for more training. People like Teco Benson are good directors because they are professionals this is because he started from a coordinator to a production manager, to producer, before he became a director. He is experienced.

Anytime I watch Nigerian movies, I hear a lot of grammatical errors. Is it that these scripts are not edited?
The problem is that some of the actors and actresses are very busy, they may not read the scripts until a day or two days to the day it will be shot. They are always in a hurry and some of the editors are not grounded.

What do you mean by some of the editors are not grounded?
They are always in a hurry; they don't relax to learn from the experienced ones.

What actually determines your choice of whom to feature in your movie?
I don't believe in stereotype, we have good actors and actresses, they can face Hollywood anytime. I usually call them and double cast to see what each person can do on the role, and then I choose. The person must also be a professional, versatile. I don't want anybody that will give me stress.

There is always a re-occurrence of same faces in Nollywood movies, is it that they alone can play that role?
It is a market factor; the marketers determine who we use. Faces in front of the video cassette determine if people will buy or rent it. If you use new faces, the viewers will term the movie not to be interesting.

What is the fate of the upcoming ones?
The industry is trying to change, we are having a new beginning, and professionalism is coming. Let them get their degree first and not just coming in and hoping to get a lead role.

Many actors and actresses reject scripts for reason or the other, do they really determine what they would do themselves or is it their right to do so?
Yes, most of my friends give me their script to read and when I am through, I can tell them to the job or leave it. We don't have good writers; people don't want to write for home videos because they are not paid well.

For how long have you been in the industry?
Since 1998; I was shuttling within the industry but my first movie “Last Command” was in 1999.

From what you have done so far, would you rate yourself as a good producer?
Yea, why won't I be a good producer, at least I have gotten a nomination, and one of my movies (Family battle) has won the AMAA award.

You have produced a lot of movies, which one of them did you find most challenging?
“The Stone”, directed by Ernest Obi. I lost so much weight, I suffered and the movie was shot in Abeokuta but not yet out because I am trying to take the movie round the world. The production started in 2008 and finished 2009.

What do you think is the impact of Nigerian movies on the viewers?
Firstly, Nollywood has brought Nigeria to limelight; it has sent a positive image of Nigeria. The Nigerian movies that makes positive impact is always a true life story, but most of them that have no lessons to teach are mere fictions.

Which work are you currently working on?
A soap opera (Siblings). Kalu Ikeagwu is the only popular actor in it. I want to give other people chance this time around. Ngozi Ezeonu will only do a calmly appearance but the shooting will start by ending of this month. As of when it will be out, you will have to get sponsorship for soap opera before it comes out.

What is your opinion on DSTV (Africa Magic) and Nigerian movies?
It has a negative effect on the industry; some of our producers fight them. People no longer buy movies. Africa Magic has dropped the sale of Movies.

We hear about sex for role in the Industry, what's your take on that?
Even if you agree to sell your body, and you are not good in acting, they won't still give you the role. If you decided to give, you have started giving meanwhile people like that are no more in the industry. It's a general thing; some people think they can sleep their way to the top. It's everywhere even in the banking industry.

Do you think Ghanaian actors are taking lead roles in Nigerian movies?
We need the challenges, let the competition come so that the best can take the role.

What has piracy done to you as a Nollywood practitioner?
What can we do? T here was a time I was in the restaurant in the UK, there was a film that was not yet out in the market, but I saw it being sold. Imagine having 101 movies in one CD, which one are you going to buy when you can buy 101 in a CD. The government is not helping us.

Any Challenges so far?
Finance basically and distribution. If only government can release film fund where people that know what they are doing will loan money. It has started even in Kenya and some African countries.

How much exploits is going on in the Nollywood scene?
We are still small, Nollywood just started in 1992. Just watch out for the real film makers and not people that do that for money and will just shoot a movie for three or four days. They are killing the industry.

Do Nollywood listen to criticism?
Nigerian movies are not appreciated here. When Rita Dominic travelled to one country, a president flew in to see her. Criticisms are everywhere, they should stop criticizing Nollywood. The people there are nice people.

Major problems you face every day as a producer?
Finance, PHCN, light is our problem, even when people rent a movie, they can't watch it. Light is one of our major problems.