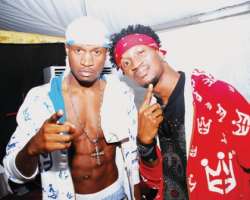 Globacom on Tuesday in Lagos formally signed on hip hop sensation duo, Peter and Paul of P_Square as brand ambassadors at a breathtaking ceremony which also saw the contracts for other Glo ambassadors renewed.
The event, held at the Mike Adenuga Towers in Lagos, was another opportunity for the crop of Globacom ambassadors to reaffirm their commitment to the telecom icon for endorsing them and for taking such a commendable step to lift Nigeria's entertainment industry to a higher pedestal.

P_Square, the newest addition to the classy list of Glo ambassadors, described the endorsement as a welcome recognition of the group's contribution to the entertainment industry in Nigeria and indeed Africa, adding that this would spur the duo to greater achievements in the music industry.

Globacom's Group Chief Operating Officer, Mr Mohamed Jameel said that the engagement of P_Square as brand ambassador and the renewal of the contract for others was a testimonial to the willingness of Globacom to always recognise the vast, shining talents that abound in the country.

“P_Square remains a well focused and popular music group and the youths of this country and this continent would find the group worthy of emulation. The choice of P_Square to join our brand ambassadors was therefore not misplaced. We have

carefully selected our crop of brand ambassadors and we believe they represent the very best in their chosen professions,” he disclosed.

“We have been actively projecting enterprising Nigerians who have excelled in their fields of endeavour. We are of the firm belief that their faces would help fire the aspirations and dreams of many youths to reach for their goals and rule their world”, Mr Jameel added.

He also said that the feedback from the public largely influenced the renewal of the contracts of the ambassadors as there has been wide acceptance and recognition for the step taken by Globacom to lift the status of Nigerian stars.