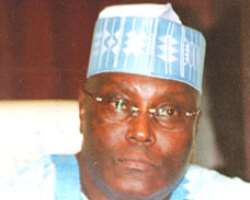 Atiku
The Goodluck Support Group (GSG), yesterday declared that it has urgent and verifiable reasons why President Goodluck Jonathan must be pressurized by Nigerians to present himself for the 2011 presidential election.

The declaration came as the Minister of the Federal Capital Territory (FCT), Senator Bala Mohammed said the time had come for Northern political leaders to be told in clear terms that other Nigerians have stakes in the enterprise called Nigeria.

Senator Mohammed who was addressing delegates at the opening of one-day National Summit organized by the Goodluck Support Group at the Abuja International Centre also said based on the present understanding of the zoning policy adopted by the Peoples Democratic Party (PDP), President Jonathan is now a Northerner.

This was even as he called on other presidential aspirants in the country to drop their ambitions for President Jonathan who he noted represents a new Nigerria of the peoples dream. Jonathan, the group said garnered and has also garnered more experience than any of those parading themselves as presidential aspirants.

According to Senator Mohammed; 'The election of Goodluck Jonathan in the 2011 Elections will ensure continuity, stability, growth and economic development of the entire country. It is equally on record that President Jonathan had a wonderful relationship with the late President Yar'Adua and has shown utmost commitment to continue the good works started by them.'

The FCT Minister further said the uncommon commitment so far exhibited as well as the love and respect shown by Jonathan to all sections of the country has qualified him for the Yar'Adua/Goodluck continuity joint ticket in 2011. He also said the ascension of Dr. Jonathan to power was divine thus should be respected by all God-fearing people. He added that the Goodluck 2011 is a Nigeria Project that epitomises national development which should be supported by all Nigerians.

Senator Mohammed therefore described the Goodluck Support Group Summit as a manifestation of genuine support of the ordinary Nigerians to call on President Jonathan to contest the 2011 general elections.

Mohammed accordingly, called on all the movements in support of President Jonathan's presidency in 2011 to bury their differences and come under one umbrella in order to form a formidable front to woo President Jonathan to declare his intention to run.

The FCT Minister further said it was a new era and a new dawn for the people of Nigeria adding while the Goodluck Support Group would not be antagonistic in its approach and mode of operation, it would not however shy away from drumming the fact there is presently no other more qualified candidate than President Jonathan.

In his own speech at the event, National Chairman of the GSG Alhaji Ahmed Ali Gulak said that while zoning is good for political stability, it should be understood that the interpretation presently is such that when a President comes from the South, the Vice President would emerged from the South.

Alhaji Gulak further said that there are 1,027 Support Groups across the nation calling on President Jonathan to contest the 2011 Elections saying that most of the groups are now coming under one umbrella for a more focused and united front.