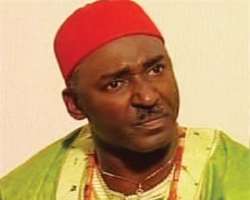 Clem Ohameze, a popular face in Nollywood was one of the few Nigerian actors that starred in Ije (the journey), a Hollywood stars studded movie that was premiered in Lagos last week. Deputy Editor, Charles Okogene caught up with him at Jade Restaurant, Ikeja, Lagos during a press conference preceding the premier and he spoke on his experience on the set of Ije, the shortcomings of Nollywood, his ambition to become a member of the House of Representatives.

You have said so much about the depth of the script, what about the fee?

Well, it was well out of the usual thing here, you understand what I am saying? Even though we had a lot of consideration for her because it was a school project, the fee is obviously far different from the usual.

So much for Ije, you have been missing in action from Nollywood. Why?

I have been out of the country for two and half years now; I just got back two months ago.

And what were you into while away?

I have other projects I was into in the UK.

Is personal; and there is this film I produced, a French movie though, I Cote D'Ivoire. For about three, four, five months I was there. It gave me an ample time to delve away from the usual thing we do here in Nigeria and try and see if I can export our talent to French speaking countries.

The film was in French?

No, there was a script in English and French; I had a few of my colleagues back here in Nigeria that I invited over with the director from here (Nigeria).

Take a look at Nollywood, do you think it is doing well?

Well, we take it one at a time. It is just that we are moving at a very slow pace in the sense that we have mediocre in control of the industry as we speak.

Even with our recent rate as the second biggest in the world after Hollywood?

Let that not deceive us; let that fact that Nollywood is rated second best in the world deceive us because there are a whole lot of things we are not doing that ewe ought to b e doing. Let us not talk about quantity, let us talk about quality. Let us see a situation where some of these movie makers or producers in Nollywood, should be able to come together, put some good money down and make a good film rather than churning out chunks in the name of film. Like I said earlier there is nothing different from what they do out there and what we do here. The only thing is that we have poor scripts here and that is one of our biggest problems here. And to a lot of people it is all about money, the passion is not there. If we improve on our scripting, I am very positive that we will make a further head way. My problem with Nollywood is scripting because it is the scripting that churns out the final product .

What is the way out?

Well, we will pray to God.

At a time we heard you were go into politics, what happened to that your ambition.

I ran for the Federal House of Representatives in 2007 but it didn't work and I am going back again. As a matter of fact that is why I came.

What is your opinion on this controversy between Nollywood and Ghollywood?

I wouldn't want to dabble into that now.