For Me, Marriage Has Been Fun And Wahala -Julius Agwu 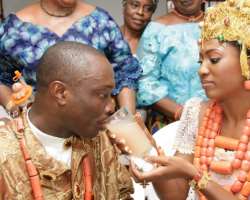 You were into music sometime ago, then you stopped. What happened to your music career or has comedy taken over completely?
I did not stop. After the first album, which was entitled: 'Okombo', people thought I did not have anything to offer with that song and that I just went into music for singing sake.

Then I did another song which I entitled, My Style', the album has tracks like 'Everybody show your handwork' and 'Sunita (When will you marry)'. After that album, I got married and I had to concentrate on building a family.

That was the reason I stepped back from music for a while. Presently, I have a beautiful daughter and I'm back onto the music scene because my third album is ready. The album should be out, hopefully, by the end of this month. So, I'm doing both, let's say my style has an infusion of music and comedy.

What is the title of this new album? Should we expect the same comic lyrics?
The title is 'D Genius'. Basically, what I do is music-comedy, but I try as much as possible to be eclectic in my style. It is a fusion of different styles from everything joined together.

There are different songs, there is gospel, there is hip hop, and the video of 'Hello My Baby' has been on air. There is a song that I featured 2Face 'No Mind Them'.

I also featured a Ghanaian girl by name 'Efya' and many others. There are 10 tracks in the album. The packaging and the CD is being done abroad. It is going to be a bumper package of my music and DVD of Crack Ya Ribs in one.

Do you still do stand up comedy?
If I am called to perform, why not? We are in a business and everybody complements each other. These days, before I accept to perform in a show, I check if it is a show that would add value to my brand. I likewise check if I am going to add value to that brand. It is not every show that I can perform in. There are certain shows that can bring down your reputation, something I have suffered to build for years, no way.

These days, you do a lot of travelling in and out of the country, why is this so?
Oh, it's all work. Just working hard, continuing and seeing how we can establish what we started long ago. That is the whole idea of the shuttling, because the job has to be done. Aside the Crack Ya Ribs show, I have an album that I'm working on. Besides, I have a brand to protect which I have to guard well.

How would you describe your marriage and does it infringe on your work schedule?
Oh it's been fun and wahala. You have to explain whatever you are doing at any point in time, unlike before. The fun of getting married to a comedian means my wife does not quarrel with me all the time because if she does, it will form part of my jokes.

So, quarrels between me and my wife, which rarely happens anyway, form part of my jokes. Jokes are from everyday events in our lives you know. About work schedule, it's just about planning and orderliness and doing the right thing at the right time.

You have reached the top in your career, how would you describe the journey so far and how do you maintain this?
In everything in life, there are challenges. There is the challenge of always re-inventing yourself, making sure that you are fresh, so that people will not say that you are no longer funny or relevant.
Comedy business is not like music business where you can come on stage and sing your old song. In fact, people actually request for the old songs. In comedy, you have to be fresh.

Sometimes, when you give people an old joke, they may hiss and say, 'we don hear am before?' 'na only this joke you know?' Such words can be embarrassing, so in comedy you must be creative and be on your toes to remain relevant.

So far, its not been easy, of course there were the teething stage but by and large, I have God to thank and I have been very hardworking too. I'm not there yet, but I'm still going.
Is there any difference in the comedy we have presently and the comedy we had in 1996 when A

Nite of A Thousand Laughs started?
If the truth must be told, I will say that then, jokes used to be like story telling. You will wait and be patient and listen to the scenario where they will paint picture for you. It is a kind of visual imagery; you wait until the end of the story before you get the joke.

But jokes have changed, comedy has changed. Now, you narrate happenings as if you are gisting with people then you chip in the joke.

Jokes are now things that people can relate with, day to day occurrences. It is just finding a way to observe things and look for the humour in it. Those days, people can just tell you joke but now, it has to be politically correct.

Your album was reviewed at your show last weekend. What other side attractions did you put to excite the audience?
People that were born in August joined and cut the special anniversary cake, members of the audience had a chance to come onto the stage to crack jokes. People thought it is easy to stand on a stage and make people laugh, but they now know better.

You are quite stylish. How does your career influence your style?
Whether you like it or not, the time we started was the time when a performer or an entertainer is seen as never do well. People see you as a dropout. So, at that time I started, one of my most important rules of being an entertainer is to make sure that I look good all the time.

It was mandatory for me to always look good and correct that wrong impression about entertainers. I made sure I looked very good to the extent that when people saw me, I would stand out and be different.

That was how I built the 'Julius Agwu' brand. My outfit, my clothing and my style would speak for me first before I start bringing out what I have inside.

I thought the sense came after the money started rolling in?
No, no, no! I have been a very fashion conscious person right from when I was very young. I took the stylish nature from my dad.

Those days that I was very young, I got what I could afford. I remember when I was much younger, in my university days, I used to buy what we call 'Akube' or 'bend down select' as many call it, washed it well and iron and each time I stepped out, oh, it was always beautiful. Then it was not a joke, the bend down select was ultimate, but now, levels don change and I buy from where my hand can reach. I don't want to go into details. I love to look good basically.

You wear more of foreign than native attires. Is that your brand or what informs your outfit?
I dress the way the occasion demands. I wear jeans and T-shirts sometimes. Unfortunately, we live in a country were we don't respect dress code. What I do with my dressing for event is that I try to make sure that I add value to that event with my appearance.

There is a way you dress to an event at times and someone will send you to go and buy pure water. If you are shabbily dressed to an event, the organisers may not let you perform. Your dressing plays on the audience psyche. When you are well-dressed, people admire you and it makes the job easier too, it gives you confidence but you have to have something in your head and then the clothing will complement it.

What do you think of the slim jeans in vogue for men now?
I love slim jeans but my wife does not like it. She says that people will think I am gay when I wear them but it is just fashion.

What's your best colours?
I love bright colours because I like to shine. I have always been a bright colour person right from time.

Like how many suits do you have in your wardrobe?
I give out clothes a lot. Right now as I speak, I should have about 60 or more suits. I have a working closet. It is like a room that stores all my clothes, shoes and belts and other accessories.

But if you are too flamboyant, the audience may be distracted with your dressing or…..(cuts in)
That is if you overdress. I don't overdress. My style basically is what makes me look good. It must make me outstanding and it must fit me.

How do you mean exactly?
Well, if I have my size in colours that I like, they make me look good. It may interest you that I even have Indian wears. Whatever stands me out interests me. For you to stand out, you have to be outstanding and as a public person, you must look good.

Are you a freak for any fashion items?
I am a freak for sunshades, i.e. glasses, shirts, shoes and belts. I like them a lot. I love shopping a lot and it has been causing problem between me and my wife. I am a compulsive buyer.

Those days when I was not married, I could just buy as many as possible, but right now, I check how the family is first. I prioritise. Sometimes, when I buy, I hide it in my boot and after sometimes, I'll bring it out to wear and when she asks me, I will say, 'ha, something that has been here since.'

Can you shop all year round?
I don't think I can. I just got back from the United States of America last week and I shopped for only my wife and daughter. They have caught the bug. I cannot stop shopping for myself or for them.

Any particular designers?
I look out for things that are classy. My glasses is Posh, my shoe is Début, my suits and shirts are from different designers. I go for what is good and classy, it doesn't have to be well-known designers.

Some people think that wearing native dresses makes one look less expensive, what is your opinion?
I don't think so. There are traditional attires that are very expensive. You wear traditional attire to suit the occasion. You cannot be going to a cocktail dinner that is a black tie affair and you are wearing agbada, what message are you trying to pass? That you are humble? It does not make sense.

Do you wear clothes made by Nigerian designers?
Of course, there is this young guy called Tunde Marcos. There are a lot of young people that are making marvelous outfits. People are now bold to come out to showcase their talent in different areas unlike before when you can count the number of tailors. Tunde Marcos makes clothes that I wear to big events. I am like his model but it is coded. It is not defined in black and white.

Is there a kind of fashion that you don't do?
I don't do Tommy Hilfiger. I try to avoid him, especially after what he said about his design not meant for black people.