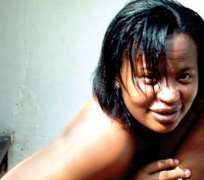 After taking a break to nurse her baby, Nollywood actress, Maureen Solomon Okereke recently returned to action. She shares her love life and motherhood experience with ADA ONYEMA.

You have been off the scene for some time now. Does that have to do with family issues?

Probably yes. Although it did not affect me when I had my first baby, it was easier in that you can take him around. But when they are two, it is like you are dealing with a crowd. So, I have to suspend it for a while. At least for them to grow up a little. For now, they are in school. So, I have all the time, I have started working again, going to locations and travelling.

How do you cope with advances from the opposite sex?

I try to be polite with them . It is not that I don't get phone calls. I still get phone calls even after two kids. It amazes me because a lot of them know I'm married. They still politely ask me out and I politely tell them that I'm married. But some of them can be very nasty, so I ignore them.

When did you start acting and what was your first movie?

I started acting when I finished secondary school in 2000. My first movie was Alternative, directed by Lancelot. I acted alongside Liz Benson, Benita Nzeribe and others.

So what prompted your journey into the movie world?

I was actually looking for admission into the university that particular year, though I didn't make it. Although I had wanted to be an actress, I never knew how to go about it. So on that particular day, I went to look for my sister because she was with the house key and our parents had travelled. When I got there, they were having an audition. I don't really understand it because I was naïve. Lancelot called on us, about seven girls, outside. He gave us a script, but I did not really know what it was. I left. It was my sister that went the following day to see that my name was shortlisted for rehearsal, and that was it.

Growing up was fun. We were not rich and we were not poor. But we were comfortable. My dad was an engineer and my mum was a banker. She worked with Union Bank and retired a very long time ago. So, we are now five. I got into the movie industry somehow and I read Computer Engineering.

We heard you had a love stint with Pat Attah. How true is it?

Pat Attah was not my boyfriend. We only did some movies together.

Did you go out with him?

No, we are just close friends. I never dated Pat Attah. But I had a boyfriend who was not in the movie industry.

Do you hang out?

Yes, I hangout but not much. I don't really like it. It is not my hobby. My best moment is when I have plenty of movies to watch; cartoon precisely.

Have you being sexually harassed in the Industry?

This particular question amazes me. Sexual harassment happens everywhere. It is no big deal. That you are sexually harassed does not mean that you have to give in. It is all about what you do with it.

Have you broken anybody's heart?

(Laughs) It is bound to happen. I don't know. You can ask the guys out there. I can't remember. I am a nice girl anyway (laugh) I don't break people's hearts. Instead, if I'm through with you, I let you go.

And has anyone broken your heart?

I learnt it a long time ago that no man is worth my tears or worth this heart being broken for.

What has been the most challenging role you ever played?

Basically, all my roles have been quite challenging in one way or the other. Till date, I think the Snake Girl remains the most challenging.

Which of your movies actually brought you to limelight?

Not really. My growth was a gradual one. I was never in a hurry.

In what circumstances did you meet your husband?

We met, love came and we fell in love with each other. We didn't really date for long. We dated just for six months and got married.

What attracted you him?

He is a handsome guy and intellectually, he is very sound. I adore him for that. You know you can't get 100 per cent. He is not flawless, just like me. He has 70 per cent of what I want in a man, and I love him.

How does he view your profession considering the scandals that are attached to it?

Well, he is not complaining. But he wishes I stay at home and he encourages me a lot.

How does your husband feel seeing you act romantic scenes?

Personally I don't feel anything. He too does not. I know that I'm a married woman. That does not mean that I can't act love scenes. There are ways of making it real without hurting a fly.

How do you see Nollywood?

We are doing well. We need a sudden change and it all has to start with all of us. I believe if we write good stories, it will get better. Why we are where we are today is because we produce substandard movies. Piracy is telling on us and the market is so bad. Imagine a movie being sold at N90.

Do you think Nollywood can conveniently compete with Hollywood ?

They can't even compete with Bollywood, and you are talking of Hollywood, these are people that started long time ago. We can only compete in quantity but not in quality. Those guys are ahead of us.

How are you finding your new status?

Being a mother is fun and exhausting all the time. Playing a wife is good and lovely when you have a man that loves you. I'm just trying to combine them equally.

What has being an actress cost you?

It has taken my privacy. I love biking but being an actress has cost me enjoying my hubby. I have not biked for a very long time. I have been telling my husband that I love to experience the BRT, and I hope to do that soon.

What is your worth?

I have been opportune to earn well in the industry.

Can you act nude for a billion dollars?

If I finish am, where I go enter? My husband house? I beg no! Not in Nigeria. For the love I have for movies, if I had grown up abroad, I would do it. In Nigeria, no.

Our mentality sees nudity as a sin, so I would not do it.