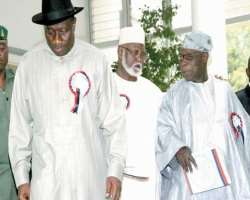 San Francisco, August 10, (THEWILL) – The Arewa Consultative Forum, an influential body often regarded as the voice of the Northern part of Nigeria today at a meeting in Kaduna insisted that the North must produce Nigeria’s president in the 2011 presidential election to ensure the principle of federal character is upheld.

The group which had earlier distanced itself from the debate on the controversial power sharing arrangement arguing that it is a Peoples Democratic Party (PDP) affair said all political parties should present candidates from Northern Nigeria to allow the North serve hold power till 2015.

Protesting northern youths from the Arewa Citizens Action for Change, Arewa Youth Development Foundation, Northern Youth Assembly, Arewa Youths Consultative Forum, Arewa Students Forum and Northern Youth Frontiers had stormed the Sokoto Road Secretariat, Kaduna venue of the meeting insisting that the body take a formal stand on the zoning arrangement. They were however dispersed by men of the Nigerian Police Force.

The Chairman, Board of Trustees, ACF, Lt. General Jerry Useni presided over the meeting while the Chairman of the National Working Committee, ACF, Major General Ibrahim Haruna was conspicuously absent.

In a three-paragraph communiqué signed by the National Publicity Secretary, ACF, Alhaji Anthony Sani, the group said, "The emergency joint meeting of Arewa Consultative Forum took place on August 10, 2010 in the Conference Hall of the Forum’s office in Kaduna. The meeting was well attended and chaired by the BOT Chairman, General J. T. Useni. The meeting resolved to issue the following communiqué: It was resolved that all political parties should endeavour to field Northern candidates for the 2011 presidential election.

"This is very important and necessary in order to ensure the principle of Federal character, which has become part and parcel of our political culture. All political parties and public organizations should continue to uphold the practice of zoning in the interest of social justice, equity, fairness and stability of a united Nigeria."

The Forum thanked government for appointing credible persons, such as Prof Attahiru Jega, at the Independent National Electoral Commission (INEC).

"The appointments have gone in no small measure to rekindle hope and confidence of Nigerians in INEC’s capacity to conduct free and fair elections.

"Furthermore, the meeting urged the government to provide the INEC with all the necessary support for the 2011 elections," the Forum said.

Meanwhile, the National Caucus of the PDP at its Monday night meeting at the Presidential Villa, Abuja urged President Goodluck Jonathan to seek wider consultation if he wants to run in the 2011 presidential election.

The meeting which had all the senior party officials including President Jonathan, Senate President David Mark and Speaker Dimeji Bankole and other principal officers of the National Assembly however approved the amendment of the PDP constitution with regards to automatic delegates to its convention; all unelected public officers will have to be elected to qualify to vote at the party’s national congress or state congresses.

The caucus however did not have a consensus on the approval required to amend the constitution to delete zoning after a heated exchange between opposing sides which according to insiders nearly had Chief Tony Anenih and Malam Adamu Ciroma engaging in a fight. After counter arguments, the caucus agreed to allow for wider consultation before a final decision is taken.