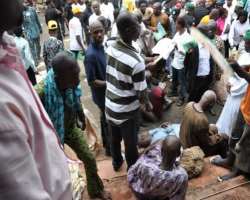 PHOTO: SOME ACTION CONGRESS OF NIGERIA (ACN) PARTY SUPPORTERS WHO COLLAPSED DURING THE PARTY'S CONVENTION IN IKEJA, TODAY, AUGUST 09, 2010.
Listen to article

LAGOS, August 09, (THEWILL) - About two persons were today feared dead during a convention of the Action Congress of Nigeria (CAN) held inside the Lagos Television (LTV) premises, an incident which resulted from mass stampeding as innumerable supporters of the party pulled the gates leading to the venue and forced their way into the premises.

However, Lagos State Commissioner for Information and Strategy, Mr. Opeyemi Bamidele denied the report of death while admitting that the leadership of the party did not anticipate the number of party members and supporters, who flooded the convention where key amendments were effected in the party’s constitution.

Also, more than twenty persons sustained different degrees of injury in the mass stampede, some of the victims were seen on the floor gasping for breath; others were groping expectantly for medical assistance and few of them could not even utter a word due to the high level of shock they suffered in an effort to get up.

In a swift response, two victims, who were apparently unconscious and in a critical state were taken away from the scene at different times to the Lagos State University Teaching Hospital (LASUTECH) in an ambulance with registration Number LA156A08 and no information was made available whether they survived.

The victims, who sustained different degree of injury in the stampede, were well-attended to by medical, rescue and security officers from the different agencies of the Lagos State Government, especially Neighbourhood Watch, Lagos State Ambulance Service (LASAMBUS) and Kick against Indiscipline (KIA) among others.

Speaking at the convention, National Chairman of the party, Chief Bisi Akande acknowledged the incident which left no fewer than 20 persons wounded and apologised, citing a reason that the party never expected such a huge number of supporters as only 10 delegates from 774 local governments were provided for.

It was the venue of the pre-convention of ACN attended by 10 delegates each from all 774 local governments in the federation to ratify the new name and other amendments effected in the new constitution of the party as several delegates and observers to the ratification of Action Congress of Nigeria (ACN) from the former Action Congress complained of poor arrangements by the organizers.

In his address, Akande stated that amendments were made to different sections of the party’s constitution. Sections that were affected include those relating to the name, motto, slogan, flag, symbol, delegate and disciplinary actions clauses of the constitution, all of which were unanimously supported at the convention except the section relation the nomination of delegates for the national convention of the party.

Both delegates and observers complained about the poor arrangement of the convention leading several delegates to sustain various degrees of injury. There was a beehive of buying and selling of fez caps and those locally made with ACN symbols with names of intending aspirants for elective posts come 2011 embossed on them.

Also delegates and observers were seeing patronizing junk foods and drinks vendors around and within the events premises. A number of delegates were displaying posters of their aspirants.