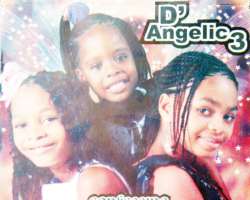 Raised in a family where they were taught the goodness of God, the trio could not think of anything else than to use their talent for God. The lead singer, Olomachi, recalls beginning to sing at three.

"When I started singing, my mummy would listen and take notes, until now when I put down the songs myself."

When she realised she wouldn't be able to sing all the songs herself, Olomachi involved her sisters. Olomachi attributes her inspiration to God. "I love Him so much that I want other children to love Him also and I want them to hear of His goodness," she states.

However, music goes beyond relaxation for the little girl. "I remember listening to myself sing for the very first time when we recorded our song. I felt like I was on top of the world, it felt good - especially during the Under-17 World Cup when I met the President, who was then the Vice-President".

Explaining how the group got their name, she said, "Our dad suggested the name to us and we liked it." That day, we were preparing to go for a program and we needed a name to use. During rehearsal, my dad just said 'now, let's welcome the Angelic 3' - and that was it."

The supportive parents, naturally, have influenced the trio. "It's really funny because I remember that they would always tell us not to [drink] cold water so we don't lose our voice. And that as you lay your bed, so you would lie on it."

Aside from music, the trio of school pupils (Olomachi is in Basic 5, Kelechi in Basic 2 and Amarachukwu is in JSS 1) also model. While Amarachukwu and Kelechi see music as a hobby and would like to be a lawyer and banker respectively, Olomachi wants to continue singing.

"I love music, gospel music that whenever I hear people sing. I feel happy because I know soon the battle line would be drawn."

Kelechi also loves to sing. "I want to know God's word more and I know many people do not know the word; and I want [them] to know."

Though raised by a father who beats the drum and a mother who sings, the girls have other role models. The sisters confided that Gospel singer Buchi and Chinyere Odoma have inspired them over time.

Though they might not have fully registered their names on public consciousness with their music, they have captured people's hearts in other endeavours. Kelechi featured in an MTN Nigeria' advert and also won the Mini Charming Princess competition. After being crowned Little Charming Princess, Amarachukwu was nominated to represent Nigeria at the last Little Miss World London but couldn't go because she was denied a visa. She has been nominated again for the same event, now holding in Turkey. Olomaachi sang the national anthem during the under-17 World Cup last year in Abuja.

Meanwhile, they are pressing on with their musical ambitions. Their debut album, 'Confessing Jesus', was launched on August 7 in Lagos. "In our album, we are trying to thank God for our lives and also that we should always put our trust in God because there's nothing impossible with Him," Olomachi says.