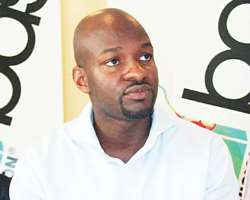 Alex Okosi is the Senior Vice President and Managing Director of Music Television Networks. He speaks with Ademola Olonilua about his life, his work and why he is yet to get married.

How did your journey into MTV begin? I was fortunate in a lot of ways. I majored in Business and Economics. I had a double major in the university, and I did really well. But in the process of going to school, during the summer, I worked, did a lot of internships, especially those relating to marketing. When I graduated from the university, I applied to MTV. The director of the school was actually a roommate with a senior guy in MTV long before I got to school. I was able to get a human resource interview. I remember I had to drive my rickety car to New York. Luckily, I got another contact who was also an alumnus of the school. He was able to introduce me to another woman who happened to be an alumnus of the school. She interviewed me but told me she did not have a vacant position. However, she introduced me to another person. Fortunately, I met the person. But it was important to me because I was an international student at the time. And to be able to get sponsored for a work visa, I needed to get a position that was meaningful. Because of my good academic record and my internship experience, they employed me.

The day I got a phone call that I was accepted at MTV, I was flipping the coin as to which MBA programme to go for, because obviously, I wanted to go to school. It was not the best thing to do, but I had to. I had a couple of people who wanted to hire me for investment banking, but I did not want to be an investment banker. Fortunately, the day I was trying to figure out the school I wanted to go, the woman just called me and offered me the job.

Did you ever think of something like MTV while growing up?

I love sports and music, so while growing up, I always wanted to be in entertainment or sports. I read the newspaper back and front. I like to know what is happening in sport before I want to know what is happening in the world. I love sport and entertainment. I loved attending shows. I liked having fun and watch people have fun. There were two things I wanted to do. I wanted to work in sports because that is the only thing I have a passion for. I also wanted to work in entertainment, but I also had hardcore degrees. I never thought of MTV, so I started talking to people.

How were you able to come out with good grades, as a fun loving person?

It was tough because basketball consumed an average of five hours a day. It was hard waking up in the morning for pool work out in the cold water, going to class, coming back by 2 am to lift weight and coming back by 4 am to practice for play outs. So, basketball consumes time and energy, just like academics. Although there were times where I had fun. But what I did was go out with the boys, especially during the off season. My team mates did not like me because my coach would often use me as an example. But the difference was that when I came back around 2 am from where we went, I would go back and start reading, because I had a lot of adrenaline. And just to stay awake in class, I would drink coffee. But I would have done my work, while the other guys would go to sleep. I think what really helped me is that I went to the boarding school before I got into the university. That school was harder than any university I have ever attended, but it really helped. Because of that, I could stay up all night studying when I knew I had work to do. But some guys would just pass out. I also never drank alcohol in school. So, when the guys were out drinking and they come back tired, all I had in me was adrenaline.

You supervise MTV, MTV base, VH1, and Nickelodeon. How do you do handle all this?

I tell people, if you put in average hours, you would get average returns, no matter how smart you are. You have to put in extra work to be good. It is almost like sport. There are people that are great in sport. The natural ability can not get you there. You have to put in more work. For me, my day is crazy. I am not a morning person, but I wake by five and I am there working from wherever I am–my bed or anywhere–till I go to work. But it is fun, because you can not ask for anything better. Also, the people that you work with matter a lot. It is what I do and love to do. Even though MTV is not my business, I feel a larger responsibility to make it work.

Nigeria is one of the biggest markets of MTV base. What has it been like doing business in Nigeria and with Nigerians?

As a Nigerian, we have an innate pride that I think sometime is a great thing. It enables us to be able to go out to the world and be great ambassadors for the country. I think doing business in Nigerian is a great thing if you are doing it with the right people. It is a bad thing if you are doing business with the wrong people, which I think is the same everywhere in the world. I know that sounds like a diplomatic answer, but I think that what I find more challenging is that it is harder to get things done because you are always trying to manage perception. You always need to explain to people the position you are coming from. Some people feel like you are MTV. For us, what drives our business is advertising. But people come to us and believe we have a lot of money. We are trying to create money; we are not sponsors. We are trying to get sponsors, and when we do, we are trying to tell them the value they are getting, because often times, the people feel that the guy down the street can do it. But the guy down the street might not be doing a quality job. What we are trying to do is sell to Nigeria the value of intellectual capital, which is often time not tangible. A guy could see a show that is great, but he may not be used to quality being important. So, that is always the hardest part in the space that we are in, because it is not a commodity you can see. It is easier to know how many barrels of oil you are selling. But when you are selling something you cannot see, it is tougher. People do not know how to put a value on it, and it makes it difficult. But I am excited about what we have done since we have been around. I think that in a lot of ways, we have been a catalyst for good things.

Speaking of intellectual properties, artiste are wondering why MTV does not pay royalties for using their products.

There are two things. One, we are having a problem on who the royalties should go to. There are different collecting societies and we have to figure out who to pay to. They are fighting themselves. One thing is important; we are a promotional platform for these artistes. A lot of these artistes in a lot of ways have great talents, but the platform we provide for them enables them to also get to other markets. And we have never played an artiste's record without their written consent. We do not demand money to play their video. We are more than willing to pay. But we have to pay to a collecting society. I can not go to every single artiste and pay individually. Right now, we are still a platform that though we have broken even, we still have a lot to accomplish. All we do is promote the artiste. If you want us to showcase your talent to the rest of the world through our platform, we would do it. But right now, we need to figure out the right party to pay to. We also have to be a promotional platform.

You have done so much for yourself. Would you say it is because you were born with a silver spoon?

No. I come from a very hardworking family. My father worked hard to provide for us, and we never needed anything. But it is nothing close to a silver spoon. There is nothing that I have earned that I did not work for. Playing basketball was not only because I loved basketball but because my focus was to get a scholarship. If I had a silver spoon in my mouth, I would have waited for someone to pay for my school fees. My success is from shere hard work and love. I would say I have an abundance of love from my family, which has been good.

If you were to describe your parents, how would you describe them?

My father just passed. He was the greatest man I have ever known from the stand point that he is a hardworking man who had principles and was unwavering to them. He provided for his family and he was loving in a man's kind of way. He had a long life. His passing away was painful and we are all going to miss him. My mum, on the other hand, is the best thing ever. All she gives is love. She prays for you, we crack jokes. She is someone you look forward to seeing all the time, because you know it is going to be happiness. She appreciates everything you do without asking her. She had seven children and was married to my dad for 57 years. You have to be a special person to do that. She was married to a tough guy.

You are about 36 years old. You have done well for yourself, but you are still a bachelor. Why?

Marriage is coming at some point. I see so many people divorce, especially growing up in the US where it is becoming a norm. Maybe I am a bit too conscious about it, but I definitely want to have the kind of marriage my parents had. I know it is not easy, but I need to find that person who would be a friend and companion.

Given your status and pocket, do you think you would get a woman that would love you as Alex Okosi and not Alex of MTV networks?

My brother says he does not envy me because of that. I just have faith in God. I am not the type of guy that feels I am bigger than life. I am not flashy. Often times, I meet people that are attracted to my person and not what I do. In fact, what I do annoys them because I do not have time for them.

How do you relax, when you are less busy?

Why did you not get married to the mother of your son?

I really do not want to talk about it.