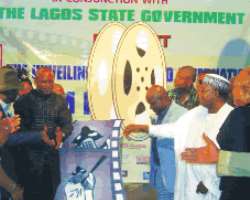 Leadership of the Association of Movie Producers (AMP), recently unveiled the new logo of its forthcoming AMP-EKO International Film Festival, at a colourful and star-studded ceremony witnessed by both celebrities and top dignitaries.

Speaking at the event, which held in Lagos and attended by several Nollywood stars and stakeholders, Lagos State Governor, Mr. Babatunde Raji Fashola, in his address, called on producers to use the medium of film for more advocacy works. Fashola, who was ably represented by the Commissioner for Home Affairs and Culture, Honourable Tunde Balogun, further charged the filmmakers to mirror the society properly with their productions.

He wants practitioners in the Nigerian movie industry particularly members of AMP, to be the drivers of the promotion of the nation's good values. The amiable Governor wants them to produce more films that will teach morals and help promote the culture of the Nigerian people positively.

While performing the unveiling ceremony of the new logo, which President of AMP, Paul Obazele explained was redesigned to reflect the collaborative agreement that AMP under his leadership had entered with the Lagos State Government over the staging of the annual festival, charged filmmakers to use the same level of creativity and imagination that has kept Nollywood alive to produce works that promote the nation's good values. In his Excellency's words: “You must begin to produce works that will teach morals, works that will enhance peaceful co-existence, promote citizenship, hard work, patriotism and works that will harness our culture for national development, because as an important medium of communication, film moves ideas and information into people's minds easily, a reason it is considered a good medium for social mobilization' he posited.

The Governor who noted that the unveiling of the festival logo marked the beginning of a long lasting relationship between the Lagos State Government and AMP, further called for unity among all the stakeholders in the industry. Adding that reasonable progress cannot be achieved if they were not united. He specifically called for unity among stakeholders in the business of filmmaking, while urging them to eschew bitterness and divisiveness.

Describing his administration as entertainment friendly, Governor Fashola maintained his promise to include the AMP/Eko festival to the Lagos State Calendar of major events and the plan by his government to set up a world-class film village in Lagos very soon. Speaking earlier in his welcome address, the visibly elated AMP President, expressed appreciation to the Governor, for his continuous support to practitioners in the motion picture industry. He thanked the Governor for endorsing the Festival and going a step further in including the festival on the list of the state's calendar of major events.

“The Governor and his lieutenants have been more than willing partners. I dare say that Nollywood will go places if all Governors were as committed and willing as Governor Fashola. The Festival holds between November 22 and 26, 2010. 'We hope to use the festival to showcase Lagos State as the investment and tourism destination of choice in Africa”, Obazele disclosed.

Information and Communication Minister, Professor Dora Akunyili was represented at the ceremony that equally had in attendance, the Registrar of Advertising Practitioners Council of Nigeria (APCON), Alhaji Garba Kankarfi. Special certificates were also presented to some outstanding patrons of the association, at the event that was beautifully anchored by star actor and filmmaker, Fred Amata.