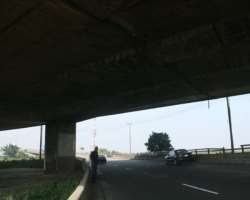 PHOTO: THE PART OF THE THIRD MAINLAND BRIDGE THAT REQUIRES REPAIR.
Listen to article


LAGOS, August 04, (THEWILL) - Key bodies of civil engineering today dispelled the fear that the third mainland bridge is unsafe for vehicles because of a supposed crack at a section of the bridge, though the bridge appeared weak when THEWILL visited the scene.

The section under query was discovered by officers of the Nigerian Security and Civil Defence Corps (NSCDS). According to the Head of Disaster Department, Mr. Francis Obinna, the bad section of the bridge is better seen from underneath when linking the bridge from Adekunle, Yaba.

During its visit today, THEWILL observed a major space of about 4 inches closed with protective rubber, which had already fallen off its position, thereby causing deep vibration as vehicles move on the bridge.

As observed, the rubber covering the expansion gap has fallen out completely along some sections creating a see-through hole. When a vehicle passes over the section, the free end of the bridge oscillates. One end particularly seemed depressed from top as its edge does not align with the other end; each vibration makes it look like it will pull out from beneath.

In his reaction, NICE National Chairman, Engr. Ade Omopeloye said he sent a member of the association there for inspection and the report he got calls for no alarm.

"Immediately, I heard about it. I sent one of our members there who went through the length and breadth of the bridge but saw nothing," Omopeloye said.

He insisted that we speak to the structural engineers just so to be sure that the news about the damage is a rumour.

One of the structural engineers we spoke who would chose not to be named said, "Those people who said there is no problem with the bridge did not go underneath. We went underneath to see it. My dear, if you go under, you will not want to stay there. You want to run."

However, NISE President, Engr. Victor Oyenuga said the displacement of the rubber covering the expansion joint does not imply danger, saying all they ‘need to do is to replace the rubber.’ He dispelled the fear that the oscillation of the free ends portends danger.

Oyenuga added that, "The bridge is designed as a double cantilever, so the ends are supposed to be free. Of course, vehicular movement will cause the ends to move up and down a bit."

What remains to be proven is whether the extent of oscillation is still within limit but Mr. Oyenuga has not visited the site.

The Director-General of FOCI, Engr. Adeniran Adekanbi declined comments on the state of the bridge until his team takes a critical look and tenders a situation report.

The Third Mainland Bridge was constructed over three decades ago and the structures used were given a life span of 50 years, if well maintained.