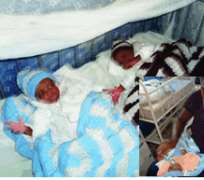 Mrs Igoniwari
In Ijaw language, Beydomo means 'let your mind be calm'. But for Beydomo Igoniwari, that name doesn't represent her current situation. Right now, Beydomo's mind is anything, but calm. Even her husband is as agitated and confused as the young lady.

So what could be responsible for the worry and anxiety currently traumatizing their minds?

On June 6, the young lady was delivered of a set of triplets. The three bundles of joy were delivered at Ondewari community in Southern Ijaw Local Government area of Bayelsa State. And since then, Beydomo and her husband, Karamotei, have been running from pillar to post, seeking for a way to pay the hospital bills and ensure the survival of their new born babies.

Unfortunately, due to the long journey from Ondewari, one of the triplets died. But that is not the immediate headache of the couple. At the moment, Mr. and Mrs. Igoniwari have other concerns. They are currently battling to ensure that they are not evicted by the authorities of the Federal Medical Centre (FMC), Yenagoa. The hospital officials have served them a quit notice, maintaining that they can no longer keep the babies and their mother at the hospital unless they pay their bills.

Igoniwari, who is at a loss on how to raise the required funds to keep his children and wife in the hospital, is pleading for help from Nigerians as well as the Bayelsa State Government. He bares his mind in an interview with Daily Sun .

'My name is Karamotei Igoniwari. I am 25 years old from Ondewari in Southern Ijaw Local Government area of Bayelsa State. My wife gave birth to triplets on June 6 at the village and because of her condition, we had to rush her down to Yenagoa. We did not know that she was going to have triplets because there was no scan done. We already had two children before now. But as she was giving birth and I saw that she gave birth to triplets, I could not eat for two days because I have two children before now.

'The situation I have found myself now is that I need assistance from the government. I have no job. I only survive on picking snails at the village. I don't know where to run for help. I am confused. The hospital has served us a notice that they want to eject us. We have spent more than one month now and our bill is almost N50, 000. I need help from the government. Even if I am given a year to pay the money, I don't know where I would get it.'

Beydomo, who also spoke with our reporter, was close to tears as she pleaded for help to save her children.

According to her, all her concern now is how the government or any good spirited Nigerian can offer help to the family.

Have they given the children any names? Igoniwari shook her head. She explained that christening the kids is the last thing on their minds. She said all they want to do now is to settle the hospital bills and return to the village where their church members and relatives are waiting to receive them with joy.