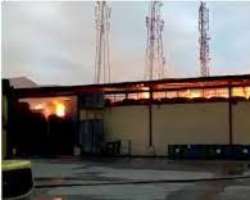 It was learnt that the affected warehouse belonged to Sumal Foods Limited.

According to reports, the fire was caused by a power surge from one of the shops in the plaza, burning down goods worth thousands of Naira.

The inferno reportedly was terrifying due to the combustible nature of phones, phone batteries and other accessories that were sold at the plaza.

“Immediately, we deployed our fire truck and brave firefighters in the scene of the fire. We were able to extinguish the fire. The fire incident which emanated from one of the shops was caused by suspected power surge.

“Only that shop was badly burnt because of combustible nature of phones, phone batteries and other phone accessories sold there. The fire also affected some of the roofing sheets of that building.

“We are extending our gratitude to those who called us in time and those helped in combating the fire.

“Please always switch off all electrical and electronic appliances when not in use to avoid power surge,” Agbili was quoted saying.