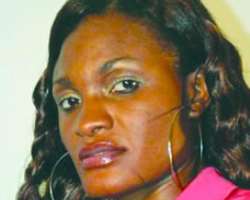 Ex-Charley Boy girl, Helen Sosu, has disclosed that the inspiration for her project, The Street University Project (TSUP), comes from her growing up experience in Africa's largest slum, Ajegunle.
She revealed that though, life in the Jungle City was rough and tough, she was lucky to have people who made her strive to be the best and implanted in her the belief that she could change her destiny.
“Like you already know, growing up in a slum like Ajegunle could be very challenging because of the level of poverty and joblessness. A lot of youths turn out to be hoodlums, drug addicts and prostitutes. But I was lucky to have escaped that sad fate because I had people around me who instilled in me hard work and perseverance. They made me realise that if I stayed focused and worked hard, I could change my destiny. I guess, that's the reason why I am here today.”
In 2007, Sosu, determined to take her message of hope back to her roots, set up STUP and published her book, The Street University, a handbook on survival on the streets without demeaning one's self by compromising one's values. The book was a compilation of poems dedicated to inspiring youths in the ghettoes of Nigeria.
Said Sosu: “A few of us who grew up in Ajegunle came together and said, we've come this far because we believed in certain principles. Why don't we go back to Ajegunle and preach this message of hope? That was how TSUP was born.
“TSUP is a social responsibility project aimed at restructuring and re-orientating youths from challenging backgrounds. The idea is for us to give them those basic things which we had but which they lacked such as mentorship and guidance so that they could be inspired to rise above their circumstances. Our first step was to publish my inspirational book entitled: The Street University, which is a compilation of my poems. I basically wrote about issues that affect youths and how they can overcome. From there we moved up to doing workshops with a view to changing the mindsets of our youngsters regarding the get rich syndrome which is doing so much harm to our country today. Most youths want to get rich quickly but we let them know that there is a process. We let them know that hard work, dedication and a belief in one's ability is the key to a happy future. The book has inspired quite a number of youths because I've been getting a lot of feed back.”
Among others, TSUP seeks to influence youths through the Arts. Resource persons who rose from sheer obscurity and carved a niche for themselves in their chosen fields of endeavour deliver lectures at workshops. They include the likes of multiple awards winning actress, Joke Silva, veteran moviemaker, Zeb Ejiro, Orits Wiliki to mention a few.
“This year two workshops are slated for September in both Lagos and Abuja respectively. Among the resource persons we have Ali Baba and Festus Keyamo. We are also talking to the Lagos State First lady, Mrs. Abimbola Fashola to deliver a keynote address. All these are people who rose from humble beginnings and carved a niche for them selves. We deliberately brought them in to sound the message that if these people ca do it, you too can do it.”
Workshops
Three years after TSUP came on stream, it has held four workshops in Lagos. It is currently putting finishing touches for two workshops, which will hold in both Abuja and Lagos on September 3 and 27 respectively.
“I'm really excited about his because for the first time we are moving out of Lagos. We are hitting the Federal Capital Territory (FCT) and that means that we are moving. Come September of this year, we are having two seminars both in Lagos and Abuja. We thank God for the strides we have made in the past three years.”