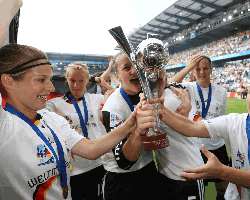 German players celebrate with the trophy after their victory yesterday at the FIFA U-20 Women's World Cup 2010 in Bielefeld, western Germany. The Germans defeated Falconets 2-0

PHOTO:AFP
Germany became the first host nation to lift the FIFA Under-20 Women's World Cup as an early goal from her penalty-box princess, Alexandra Popp, and a late own goal earned them a 2-0 victory over Nigeria's Falconets.

But Nigerian girls were fantastic throughout the final match as they were just unlucky on a day Germany utilised her scoring chances to crown the event with a glorious outing.

It was Popp's 10th goal of the tournament and means she won the addidas Golden Shoe for top markswoman at Germany 2010, while also becoming a joint top scorer in all five editions.

It was the second time Germany had lifted the crown – she was also the champion in Thailand in 2004 – and it was fully deserved as she wrapped up her sixth successive victory. While Nigeria was wonderully spirited and never gave up, the home team should have made it easier for the capacity crowd in Bielefeld with a second goal before finally putting the issue beyond doubt in injury time.

Germany has made a habit of scoring early goals in the tournament and she made sure the final was no exception. In the eighth minute, the ball was hit long and high from the right-back position and Popp flicked it on. Dzsenifer Marozsan, standing behind her, cushioned the ball before feeding a simple square pass for Germany's prolific number 11 to run onto. Her surge took her past Joy Jegede and a shot towards the far corner comfortably beat goalkeeper Alaba Jonathan.

With Nigeria – the first African team to appear in the final of any FIFA Women's World Cup or Olympic Games – still coming to grips with the game, Kim Kulig came desperately close with a direct free-kick which just skimmed the bar. But the Nigerians were a very resolute outfit and any thoughts the home crowd may have entertained about this being a formality after the early goal were swiftly dispelled as Nigeria raised their level and intensity impressively.

Ebere Orji had been the Falconets' best player so far and when she picked up possession down the right in plenty of space she elected to take it on herself. The angle was tight but the shot was powerful and Almuth Schult elected to turn it over. Nigeria was now full of belief and after Helen Ukaonu had been crowded out, the ball fell nicely for Desire Oparanozie who was only inches wide as she attempted to curl the ball in from her position to the left of goal.

Germany was almost gifted a second goal to take into half-time when Jonathan kicked the ball straight to Sylvia Arnold who shot towards the left-hand corner. The keeper made amends with the save.

Nigeria continued in the same vein, winning some vital midfield challenges and forcing Germany back with her strength. Yet, it was the home side who had the best openings.

Popp might have added to her total on two occasions as Svenja Huth picked her out with crosses. The first she couldn't keep on target, the second ballooned off her chest and Jonathan was forced to claw it out from beneath her crossbar. At the other end, Oparanozie was a constant menace with her physical attributes but the Nigerians' final ball let them down.

Germany remained in charge: Marina Hegering firing too high, while Huth's shot forced a fingertip save and substitute Stefanie Mirlach demanded that Jonathan push this one over the top. The game finished with Germany well on top, Kulig scuffing a shot against the post. Then, in added time, the home side forced two corners and from the second Kulig headed powerfully towards goal. It came back off the post and unfortunately for Osinachi Ohale it hit her on the back before crossing the line.