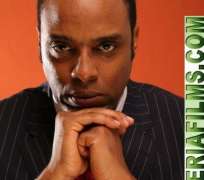 What you are about to read isnt a re-enactment from any movie, it actually happened to one of Nollywood's finest, Kalu Ikeagwu.

Reading the actor's heart felt plight, i cant but wonder what kind of world we are living it. Read below, a detailed write-up of Kalu's experience in the arms of strange people.

“It all began when I was called by a producer through a director friend of mine to do a sixteen day movie production in Ghana. The production was slated to begin on the 28th of June and end on or before the 13th of July. I spoke with the producer, a lady, and on the strength of my relationship with my director friend, agreed to collect my fee when I got to the set. I didn't think much of this, being excited at the prospect of working with him again and also the thought of working in Ghana again with its friendly people. I told them I had to come in the following day, Tuesday, as I had some work to complete and they agreed. On the Tuesday, I boarded the plane and called the director to let him know I was on my way only for him to tell me he had been trying to reach me the day before to postpone my flight till Friday as they still had some location problems. I was numb. I felt like my stomach had dropped from beneath me. I hadn't even taken off and now this?! I told him I'd already boarded the plane and couldn't turn back. And he said to come anyway as there was still choreography rehearsals to do.

I got to the hotel at about eight thirty and was met by the director, my friend, who told me there was no problem since I still had four days to choreograph my movement and learn some basic martial arts moves – it was a martial arts movie – before shoot began on Saturday. The producer came later on that morning and we were introduced to one another and she told me she would come to see me in my room later when she finished talking with the director. I did not see her again that day or the next. I had fun rehearsing though, learning moves that seemed so magical to me before and they were exhilaratingly exhausting. Days passed on to the sixth and then seventh day and still no shoot and were peppered with all sorts of reasons why we hadn't commenced shoot. With some trouble I managed to get my money and began to wonder why the producer seemed to have no problem burning money on hotel bills and keeping us there doing nothing even after I had told her my days were going by. I had scheduled my projects with other producers for later in the month and the next so I wasn't particularly bothered. I just knew when my time was up I would have to leave. The hotel where we were was on the outskirts of the city of Accra and to get into town was to grapple with horrendous traffic lasting up to five hours so I busied myself with rehearsing to perfect my character's moves, studying my scripts for the next projects and browsing at the local internet cafes.

On Wednesday the 7th of July the director and I were moved to another hotel to gain better accessibility to town. We still hadn't begun shoot. This was a first for me. I had never seen anything like it. The producer never came around and still did not communicate with me. I had asked her once before whether she was comfortable burning her money like that and she said she had everything under control. I thought then afterwards to keep my thoughts to myself. Oh I forgot another kicker! I was told that the Ghanaian minister for arts and culture had announced that every Nigerian artist or crew member would be charged three hundred US dollars for every project he or she worked on in Ghana and so the said amount would be deducted from my fees. I was astonished that such an edict would take effect immediately without me being forewarned about this. In the spirit of goodwill, bemused as I was, I acquiesced. Little was I to know that this was just the tip of the iceberg of things to come in the following days I was to spend there. There were many; armed robbery in my hotel, non payment of hotel bills, my abduction from my hotel in the middle of the night by soldiers among others.

I laugh mirthlessly as I write this because I am still traumatized over my experience in that production in that wonderful country called Ghana. I beg to be let off for now to continue the rest of the story in another post which will be coming up very soon.”

So sad that this could happen to one of our own. While we await Kalu's concluding narration of all that went on, i cant help but remain baffled. So glad Kalu got out safe.