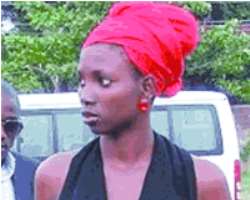 
Two-count charge
Let's start picking your offences from your headgear. First, your turban is not properly tied. In fact, it looks like you were so much in hurry you just threw it on to cover your hair. Secondly, with such a revealing blouse, you shouldn't wear a short clingy skirt with a slit. Haba! Has the melt-down affected you so badly that you must resort to this aggressive marketing strategy? Pay a fine

of N2 million.
Why?
It is true that you can never be wrong in an LBD. But big sis, you let your hair down and you still have that chunky necklace on. Did you expect fashion police to ignore this misdemeanour? Section 123 of the 1990 Style Act states: 'When you let your hair down it is better you wear light or no jewelry so that you can flaunt your neck.' For violating this provision, this court orders that you join the boys cleaning windscreens at Maryland junction

for the next six months.


Aunty Yeni!
The jury was really pained when the fashion police brought your case before this court, on account of your status in society. Without mincing words, you are overdressed.The beads, the hair accessories, etc. What's that piece on your neck? . Because you are not a firt time offender, having appeared here before, the fashion police is ordered to detain and transport you to Poise Nigeria, where you will take special courses

on style and simplicity.
No appeal!


•Photo: Sun News Publishing
Pretty face
We understand you are young and you've got great skin. But a reputable actress like you is a role model for young girls. Have you forgotten section 144, subsection 24, paragraph 'a' of the Style Act says that 'less is better? You have been found guilty of contravening the law and consequently fined N1 million. The police should confiscate that dress and deliver it to SOS Village for use as a duster.

Offensive
Your cleavage display is clearly in bad taste. The jury sobbed on sighting this incriminating evidence. We were even told that you tried to tamper with evidence when you were picked up at the scene of the style crime. What are you trying to achieve with this by fire by force cleavage show? For flagrantly flouting the law you have been

fined the sum of N1 million..


Is this a nightmare?
When you got into the dock we couldn't help asking whether Hurricane Katrina was also a special guest at the red carpet event. That would be the only reason your hair is standing at attention like soldiers on parade ground. Your hair is just trashy. Pay a fine of N2 million. I rise.