Another Sex Tape Of Music Producer and Singer Leaked 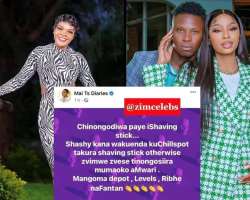 DJ Levels, a Zimbabwean Music Producer and singer Shashl(Ashleigh Moyo) have got their image rubbed on the Mudd as the sex tape involving the duo is transmitted to different Media platforms.

Levels was seen in one of the photos shared online, standing stark naked in front of a mirror while holding his phone to capture the reflection. The entertainer was then seen afterward having sex with Shashl in same room.

Shashl however has spoken to the State owned H Metro tabloid newspaper and given her side of the story claiming that Dj Levels was someone who “would force me to sleep with him when I didn’t want to.”

Her statement read partly: “He forced me into the situation. He would force me to sleep with him when I didn’t want to.

“It started on social media when people were saying Levels and Shashl are dating, yet we were not.

“He is actually the one who posted that story. Later on, he started to corner me to sleep with him.

“I refused on several occasions before he threatened me that he would not record my music,” she claimed. I refused to actualise the relationship. I was cornered, I was between a rock and a hard place.

“He kept threatening me over releasing some nudes. He then released a picture of us kissing, in which he warned me that he was showing that he can do more than that.”

“It was a lie that I stole his phone, how can I steal his phone? If I had stolen it, why was he calling?

“He released his nudes to act as if someone was dropping them, he then later released a sex tape..."