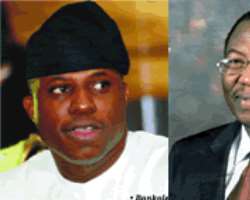 Hon. Bankole and Gov. Daniel
The power play between Ogun State Governor, Otunba Gbenga Daniel and the Speaker of the House of Representatives, Hon. Dimeji Bankole, robbed the shine off the commissioning of the long-abandoned Sango-Ota bridge, in Ogun State yesterday, as the ceremony almost resulted in a bloody clash.

Ex-President Olusegun Obasanjo had awarded the contract for the construction of the bridge as part of the dualisation of the Ota-Abeokuta Road. The project was, however, not completed before Obasanjo left office in 2007. The bridge project was abandoned for many months, while residents of the area and travellers suffered untold hardship.

Hopes were, however, kindled late last year when the Speaker influenced the Federal Government to release funds and the contractors, Julius Berger, returned to complete the abandoned project.

The Speaker had also on several occasions visited the site, assuring the people that the project would be completed, while the residents grappled with bad adjoining roads, which the state government had also abandoned.

Apparently elated that he had scored a political victory with the Sango-Ota bridge, Bankole had issued a statement, announcing that the project would be inaugurated on Thursday.

Governor Daniel and the Minister of Works, Senator Sanusi Daggash had arrived the ceremony earlier than the Speaker and taken their seats not too far from the Olota of Ota, Oba Moshood Alani Oloyede.

No sooner had he taken his seat than the governor's supporters, carrying placards of aspirants in the forthcoming elections, called on the governor to address them. Daniel, while addressing the gathering, made some scathing remarks about Bankole, but did not mention the Speaker's name.

Amidst the hailing of the governor by his supporters, Bankole's arrival at the venue also enlivened the area, as many residents hailed him for facilitating the completion of the abandoned bridge.

The Speaker was inspecting the project and trekking down to where the governor and the minister sat.

Then drama ensued as the minister and governor sighted the Speaker and hurriedly moved to commission the bridge without waiting for the Speaker to join them. Both Governor Daniel and Daggash, after the inauguration of the project, went straight into the waiting white Coaster bus, bearing the state government's number plate. The Speaker, who was visibly disappointed at the action, forced his way to meet the governor amidst tight security, apparently to express his displeasure.

The development almost resulted in a bloody face-off between the governor and Speaker's security guards and aides, while the guests scampered for safety. Immediate the Speaker disembarked from the governor's bus after about three minutes tete-a-tete and headed for his official car, miscreants who had converged on the scene took advantage of the rowdy situation and began unleashing terror on the people.

There was pandemonium as guests and residents ran for their lives with the miscreants throwing chairs. When the scene became too rowdy, the Oba Oyede and other traditional rulers took to their heels with their chiefs. Meanwhile, the Federal Government has awarded the third phase of the bridge to Julius Berger despite the un-completed phase two of the project.

In his remarks, the minister apologized for the delay in the execution of the phase two, adding that the third phase would not be prolonged.

He stated that Julius Berger would complete the last aspect of the project within the next 15 months and described the project as economic infrastructure, which would enhance economic development of both Lagos and Ogun states. The Speaker, who arrived the Presidential lounge of the Lagos Airport in a convoy of cars, after the ceremony, looked slightly ruffled, and spoke on the incident before returning to Abuja. As he alighted, he went straight into the inner chamber to have some rest.

When he eventually spoke to Aviation correspondents, Bankole said there was no problem among himself, the works minister and Daniel, stressing that his desire was to ensure Ogun State enjoyed as much Federal Government support as possible. He also denied the rumour that he had threatened to sack the minister, adding, 'ask him. He should tell you if it is true or not.

'There was no fracas in Ota, I cannot remember whether anything like that happened. We went to commission a bridge and that was all that happened. I did not see or witness any drama; we only commissioned a bridge; that is all I can remember.

'As an indigene of Ogun State, I am committed to seeing federal presence in the state. That is my commitment. I do not have powers to sack any minister. How can I do that? All I can tell you is that there was no drama and we commissioned a bridge, nothing less,' he explained.