By Advocacy Network on Religious and Cultural Coexistence (ANORACC) 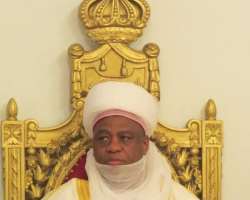 The Advocacy Network on Religious and Cultural Coexistence (ANORACC) has criticized His Eminence, Alhaji Muhammed Sa' ad Abubakar III, Sultan of Sokoto, for stating that Nigerians should understand Fulani people’s "Point A to Point B" movement.

The Director of the Civil Society Organization, Odimegwu Onwumere, stated on November 26, 2022, in Port Harcourt that the Sultan was playing the ostrich with his statement while supporting the invariably highhandedness of his people across the country.

His Eminence, Alhaji Muhammed Sa' ad Abubakar III, Sultan of Sokoto, recently requested help from the leadership of the Miyetti Allah Cattle Breeders Association of Nigeria (MACBAN) in finding a long-term solution to the country's problems with kidnapping and banditry.

At the National Mosque in Abuja, where the new national executive officers of MACBAN were sworn in, the Sultan made the statement.

The ANORACC said the Sultan was entitled to express his displeasure with "some Fulani children involved in banditry and kidnapping," but he was not entitled to declare that "he cannot sit and allow the country to go into fractions."

According to the ANORACC's press briefing, "Alhaji Muhammed Sa' ad Abubakar III can only say that he will not sit back and watch the Fulanis, not the country with its many ethnic and linguistic divisions, fall apart.

"The Sultan's statement was rather autocratic in that it imposed rather than bolstered national unity, as he might have intended.

“ Furthermore, if the Sultan stated that the danger of separating the country was due to specific things Nigerians are not doing well, he should have stated that a few sub-public states (rather than sovereign states) are the issue in the country.

"For instance, the Fulanis' insistence on claiming ownership of all the country's lands was witnessed by the Sultan (not supervised). They have been keeping their word.

"Their most recent incursion into three communities in Enugu resulted in dozens of injuries and deaths.

"When the Sultan said that there would be peace if Nigerians understood that Fulanis move from point A to point B, he was being naive. When he claimed that Fulanis were people who valued peace, he lied sparingly. That is nepotism at its finest.

"Because the Sultan accepted that their Fulani sons were involved in nefarious banditry and kidnapping, it was expected of him that he would admit that he had failed as the leader of the Fulani people in Nigeria and the Muslim community.

"The Sultan ought to be aware that the territories' history, which dates back approximately to 1900, includes a number of powerful West African kingdoms or empires that ruled during the pre-colonial period (16th to 18th centuries), including the Oyo Empire and the Islamic Kanem-Bornu Empire in the northeast and the Igbo kingdom of Onitsha in the South-East. Nigeria wasn’t there. When did the Fulanis come to the northern part of the country originally owned by the Hausas and today dragging ownership of lands across the country?”

The group cautioned the Sultan to be mindful of his statement on separation. The ANORACC’s statement went further:

"If the people who make up a country or a section of a country do not find it advantageous to be together, breaking up a country has never been considered a sin anywhere in the world. It is only sitting on the rights of citizens through oligarchy and feudalism that is a sin.

"Therefore, the Sultan's claim that he is unable to watch Nigeria break up into smaller pieces is untrue. The Sultan's urging Nigerians to understand Fulanis as people who move from "point A to point B" is regressive!

“Even in the twenty-first century, open grazing by Fulanis should have embarrassed the Sultan, but he was supporting them as a people who moved from "point A to point B."

"When he said that his Fulani relatives are moving from point A to point B, he should tell them to respect the native laws of the people they meet at point C rather than criticizing their laws and using the sword because the Sultan said Fulanis were "a peace-loving people"."