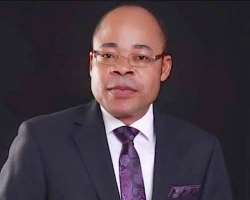 At every turn in every human setting and history, God always donates human instruments for the implementation of His will for any given society. In Ebonyi State where the long history of neglect and epileptic or pretentious attention to human capital development by the establishment has given rise to a bloated constituency of despondent and dependent population, God has raised a dauntless humanist and common good activist to restore the dignity of the downtrodden through remedial developmental opportunities aimed at sustainable, functional and edifying living! This divine donation is Senator Emmanuel Uzor Onwe, Ph.D.

Born without a silverspoon on 25th November, 1967 in Echara Nkpoke community of Ebonyi State, Onwe is a personification of excellence and a serial positive conqueror: He conquered his background by dint of hardwork and scholarship and studied in London School of Economics - an ivy league citadel of learning which was an exclusive preserve for the bourgeoisie. Onwe conquered the pathological phobia against the blacks by winning Sir Thomas Moore Award at the Inns of Court School of Law; and by rendering impeccable services in fiduciary capacities to the international community and mankind in general at Amnesty International. Above all, Emmanuel Uzor Onwe conquered the complexes and emotions which often made Africans lose their true identities in similar sojourns. Onwe returned to Nigeria versatile and fully developed in character and learning with his true identity as an Ikwo countryman and a Nigerian patriot untainted; he speaks his Ikwo dialect effortlessly.

In 2007, Emmanuel Uzor Onwe brought his therapeutic touch to the ailing Nigerian leadership set-up by joining the ever-intriguing Nigerian politics. He contested the 2007 Ebonyi Central Senatorial District election on the platform of PDP. Petrified by Onwe's intimidating profile and impregnable candour, Ebonyi political actors abandoned rules of pre-election engagement and foisted someone who did not contest the primary election on the political party as candidate. Emmanuel Uzor Onwe's Spartan will came in handy. After three years of high profile legal fireworks, the Court of Appeal, Enugu ordered for the inauguration of Emmanuel Uzor Onwe as the senator representing Ebonyi Central Senatorial District of Ebonyi State. Senator Emmanuel Uzor Onwe was in the Nigerian senate between 10th August, 2010 and January 2011 before the unrelenting beneficiaries of the old order moved the Supreme Court of Nigeria to assume jurisdiction in a pre-election matter and set aside the judgement of the Court of Appeal. Onwe, an unquenchable good-governance activist, offered himself for the same position in the 2011 general elections on the platform of APGA and was already coasting to victory in the polls when the election was terminated midstream on flimsy grounds. Onwe refused to participate in the rescheduled polls which results were predetermined.

As a social engineer and pillar of hope, Onwe is always at home with the masses whose waning spirit and strength he appears to be divinely called to revive and inspire via status-enhancing philanthropy to enable the people thrive and assert their natural rights to good governance. Through his Njiko Igbo sociocultural group, informed newspaper commentaries/opinions on public affairs and other strategic social engagements he took up alongside eminent Nigerian statesmen between 2011 and 2014, Senator Emmanuel Uzor Onwe mobilized the hitherto moribund traditional institutions and their rural subjects across Nigeria to demand good governance through lawful means. The increase in the number of voices of reason and new consciousness which pervades Nigeria is not unconnected with Senator Onwe's efforts. In 2015 when attempts were made to carpet the rights of Ebonyi people to choose their leaders, Onwe mobilized the masses to the democratic trenches. To demonstrate his capacity not just to lead but to also follow, Onwe served scrupulously as spokesperson for David Umahi's administration for four years and historically turned down a reappointment in 2019 to the utter amazement of the offeror who believed that every man had a price. Onwe who is APGA's senatorial candidate for Ebonyi Central District and a great pep to APGA's iron bid for Ebonyi governorship seat in the 2023 general elections is currently in democratic trenches over the acute lack of democratic ingredients in his dear Ebonyi State.

Sen. Emmanuel Uzor Onwe is a "full-circle" personality. He has fully-functional head, heart and hands which he deploys to whatever he chooses to do. Onwe, an intellectual giant with spartan spirit and sinews, can succeed on earth, mid air and beyond the sky! In the office, he is a bureaucrat; in the farm, he is the tender arm that brings good yields from crops; and at home, he is a quintessential father.

The "God-likeness" imbued with this unique gift to Ebonyi State and Nigeria has healed the wounds of many and given hope to the hopeless in great ways through his pristine philanthropic interventions in which the dignity of the many beneficiaries is of paramount importance. Onwe, a positive riddle that will be cracked in the course of time, is the Ebonyi Central senatorial candidate of APGA in the 2023 general election. He is one hero we cannot sing enough!

I pray God who rules in the affairs of men to enlarge Senator Emmanuel Uzor Onwe's coasts for the sake of his people.