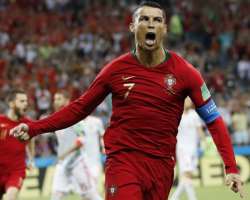 Portugal national captain Cristiano Ronaldo claimed another record as he became the first player to score in five World Cups with a penalty to help his side to a 3-2 win over Ghana on Thursday.

The first-half of the clash was forgettable apart from a couple of Ronaldo chances.

However, Ronaldo, scored a penalty in the 65th minute after an innocuous coming together with Mohammed Salisu saw the referee point to the spot.

Ghana came into the after a poor first half as captain Andre Ayew equaliser in the 73rd minute.

Joao Felix restored Portugal's lead five minutes later, however, and Ronaldo then showed his class with a jinking run before sliding a pass to Rafael Leao to leave Ghana stunned.

Osman Bukari's 89th-minute headed reply set up an anxious ending for Portugal but they survived nine minutes of stoppage time to win their opening game of a World Cup for the first time in their last four appearances.