NOLLYWOOD PRACTITIONER WHO IS FRAUDULENT 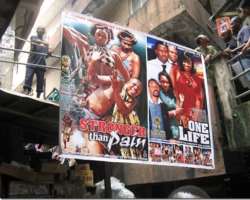 The Associate Producer of Total Crisis, War Game, Girls' Cot, and many other Nollywood home videos, Stanley Ebonline, has been reported by his colleagues who are equally promising and established actors like him, from Lagos, Asaba and it's environs, of swindling them of their hard-earned sweat running into several thousands of naira.

As the story goes, Stanley who is prominent in Lagos and South East was said to have collected the sum of N15, 000 each from some people as registration fee to feature them in some movies only for him to renege on the mutual agreement they entered into. These aggrieved actors who were supposed to be involved in his movies having waited for the whole year took on him and started raining curses on him. While this brouhaha between them and Stanley was going on, one of the stakeholders in the industry told www.nollywoodgists.com that it's a fraudulent act for Stanley to have received such fees from people at all, because it's the only regulatory body, Actors' Guild of Nigeria, that has the right to demand for any form of fee either from intending or established members. It was also confirmed that people had in the past been victims of Obi Nmadubobogu and others who allegedly took money from them for forms and sold the forms out to other people.

“This case should really be looked into and everyone involved in this practice be brought to book.It''s has become an issue in the industry and it's really given our fast-rising industry a bad name. We need to do something quick before it generates to something else”, one of the top producers in Lagos informed www.nollywoodgists.com.