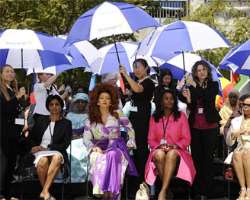 Munyonyo — The United States will not provide a safe haven for money stolen from Africa by its corrupt leaders, US President Barack Obama said yesterday.

Mr Holder is part of the American delegation to the Kampala summit led by Mr Johnnie Carson- America's top diplomat on Africa. In a wide ranging speech which touched on the terror attacks and America's help to Uganda in Somalia, Mr Holder delivered a stinger on the touchy issue of corruption.

"I have assembled a team of prosecutors [to deal exclusively with this]" he said adding that the US was also willing to support the development of African judiciaries to deal with the monster of corruption. International cooperation over money leaving national treasuries and entering tax havens and western banks- has long been a sticking issue.

The United Nations in 2005 pioneered the Convention Against Corruption - that sought to cast a wider net against criminality across borders. Many African leaders have long been accused of personal extravagance at the expense of their populations- whose excesses like that of former Congolese leader- Mobutu Sese Seko have become legend. Governments in Africa- including Uganda, which lose close to Shs500 billion million in corruption each year, have also been accused of cosmetic attempts at fighting the vice.

Money recovered.
For countries like Nigeria however, authorities worked with Switzerland to recover some money stolen by Gen. Sani Abacha. He was accused of stealing £3 billion from government coffers. While the move is a good initiative, it will require a more global effort to solve the problem.

Yesterday Mr Holder, however, promised more support for the African Union force in Somalia saying America was bound "not only by friendship and partnership" but loss from the July 11 terrorist attacks in Kampala that also claimed the life of a US citizen.

At least 76 people were killed in the twin attacks at the Kyadondo Rugby grounds in Lugogo and the Ethiopian Village Bar and Restaurant in Kabalagala. Mr Holder said AU forces were making "heroic contributions" on the ground in Somalia and described attempts to justify the attacks as "unambiguously shameful".